For Christmas this year I desperately tracked down all of the little Paw Patrol guys.  I made sure someone got Quinn the big Paw Patroller and I double checked (Okay I quadrupedal checked) that my brother got him the look out.  The reason is my Quinn ADORES Paw Patrol.  We can't go anywhere without with out his fluffy blanket and stuff Chase toy.  If it was up to him he would wear the same Paw Patrol shirt over and over again and he likes to pretend him and Loki are part of the Paw Patrol team.
It is a sweet show that promotes working together as a team and getting along.  I also promotes doing your best and helping others.  For me it teaches values I want my son to know.  So if he is going to fall in love with a show I am so okay with it being Paw Patrol!
I am sure you know when I was asked to review the all new dvd Sports Day!  I couldn't say yes fast enough 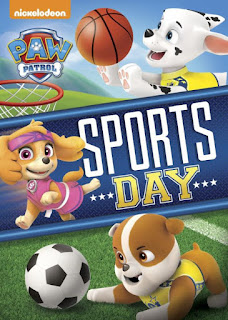 The PAW Patrol pups know how to mix fun and responsibility in this new DVD, PAW Patrol: Sports Day!available on August 2! Everyone's favorite rescue pups are back in action in six exciting, sports-themed adventures and rescues. This DVD contains many adventures, including Ryder and Marshall forming a basketball team to help Mayor Goodway, Everest snowboarding to make a daring rescue and the Pups using their brand-new Air Patroller to find friends in need. There's no denying the Pups know how to be brave and have fun! Produced by Nickelodeon Home Entertainment and distributed by Paramount Home Media Distribution, PAW Patrol: Sports Day! joins the rest of the PAW Patrol releases as the hottest preschool TV DVD franchise on the market, and will be available on DVD August 2
PAW Patrol: Sports Day! includes the following episodes:
PAW Patrol: Sports Day! Fast Facts:
Street Date: August 2, 2016
DVD Running Time: 92 minutes
Audio: English 5.1 Dolby Digital, French and Spanish Dolby Stereo