Before bed each night I read some of the Bible to my kiddos.  And there is always certain parts that really get to me.  The top one being as Jesus is on the cross and calls out Father please forgive them they know not what they are doing.

I choke up and cry, because his love for us was so pure that even as he was being tortured he still begged redemption on our behalf.  My kiddos never understood why I cried and why I got upset.  Then I left them watch The Bible with me and when they seen it with their eyes it made sense.  They got my tears were an overwhelming feeling of gratitude to Christ.

Sometimes it is easier to understand things when you watch them.  At least it is for my kiddos that is why I love movies and shows like The Bible.  And the latest part of our religious DVD collection
Peter The Redemption 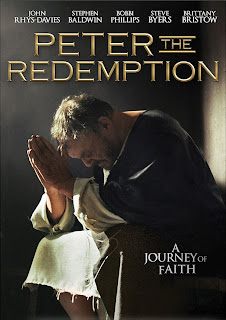 Embark on an inspirational journey of faith in the spellbinding biblical epic starring Emmy® nominated actor John Rhys-Davies (Lord of the Rings franchise, Shogun, Indiana Jones franchise) and Stephen Baldwin (God’s Club, Faith of Our Fathers), Peter – The Redemption, arriving on DVD and Digital HD August 2 from Cinedigm (NASDAQ: CIDM). The moving faith-based film artfully retells the biblical narrative of Apostle Peter during the first Christian persecution. Also starring Steve Byers (“Smallville,” “The Man From High Castle”), the film was celebrated by The Dove Foundation and was awarded their “Faith Friendly Seal for Ages 12+.” Directed by Leif Bristow (Joseph & Mary) and written by John Patus (Left Behind), Peter – The Redemption follows Peter (Rhys-Davies) as he is tormented by his denial of Christ. Having spent his life attempting to atone for his failures, Peter’s true devotion as a witness for the Lord is tested yet again as he faces certain death at the hand of the cruel Roman Emperor Nero (Baldwin). Will he falter again and let his weakness betray him? Or will he rise up triumphant in his final moment?