Disclaimer:  I was given this product for the purpose of review.  I was not paid in anyway to write this review 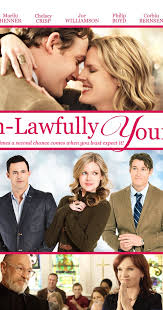 From Home Theater Films, the creators of Christian Mingle, discover the joys of falling in love in unexpected places in the enchanting romantic comedy, In-Lawfully Yours.

In-Lawfully Yours follows Jesse (Crisp), a fun-loving New York City girl. After her husband Chaz (Boyd) cheats on and later divorces her, Jesse still graciously helps her recently widowed mother-in-law, Naomi (Henner), pack up her home in small-town Bethel Cove. Jesse’s candid wit, eccentric questions and big city ways clash with the local community, including the town pastor Ben (Williamson), who also happens to be her ex-husband’s brother-in-law.
The unlikely duo soon discovers what they are both looking for: each other. But when they make their relationship public, Jesse’s ex-husband rallies the community against her and gets Ben fired from the church. Jesse leaves Bethel Cove to bring peace to Ben’s situation, and to hopefully find a place where she truly belongs, in spite of the fact that she can’t stop thinking about Ben.

This is so a feel good movie!!  Of course the main characters hit bumps along the way and even though the end is predicable it was still sweet watching them get there.
I love that it stays true to its faith based roots