Disclaimer:  I was given the DVD in this post for the purpose of review.  I was not paid to write this review.  All opinions are my own

I am not joking when I tell you this was Quinn's Christmas list last year!  We just started to make his list for this year and he wants the Big Marshal as he calls him and the Paw Patrol Pad and some type of Paw Patrol Helicopter.
My son is obsessed and it is okay with me, because I think the Paw Patrol pups are sweet and promote friendship and working together.  3 things this mama looks for when letting her boys watch TV.
We do have several Paw Patrol DVDS and my DVR is over loaded with episodes, but when I seen Paw Patrol had a Christmas DVD I just knew Quinn had to have it! 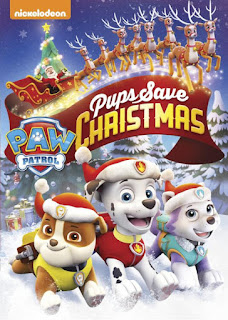 Unwrap a high-action adventure this holiday season with a collection from one of the hottest preschool series on TV, PAW Patrol: Pups Save Christmas. This latest puppy collection features daring rescues with just the right amount of holiday cheer! Join Ryder, Chase, Everest and the rest of the gang as they embark on snow-filled adventures to help Santa save Christmas, rescue penguins and polar bears, and much more. Whether they're feeling festive, competitive or silly, it's no secret that the pups are here to bring a little extra joy to this holiday season. Produced by Nickelodeon Home Entertainment and distributed by Paramount Home Media Distribution, PAW Patrol: Pups Save Christmas will be available on DVD November 1