I was given products  in this post for the purpose of review.  I was not paid to write this review

Get ready for another epic adventure with our favorite Shelled friends in the T.M.N.T. all new DVD
Earth's Last Stand
Join LEO, RAPH, DONNIE AND MIKEY save New York  yet again! 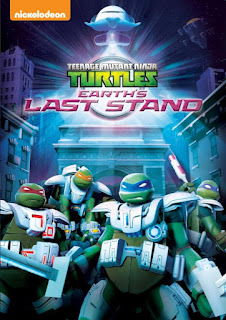 The crime-fighting Turtles are back and ready to fight for their city in Teenage Mutant Ninja Turtles: Earth's Last Stand, available on DVD December 13, 2016. In this collection of seven season four episodes, the Teenage Mutant Ninja Turtles find themselves gathering the last bits of the Black Hole Generator to return to NYC and save the planet from the Triceratons. Along with old friends and new foes, the Turtles go on a wild ride to protect the city they know and love before it's changed forever! Created by Nickelodeon and distributed by Paramount Home Media Distribution, Teenage Mutant Ninja Turtles: Earth's LastStand will be available on DVD, along with a Raphael zipper pull as a gift with purchase while supplies last, on December 13, 2016, for the suggested retail price of $14.99