MIDDLE SCHOOL: THE WORST YEARS OF MY LIFE 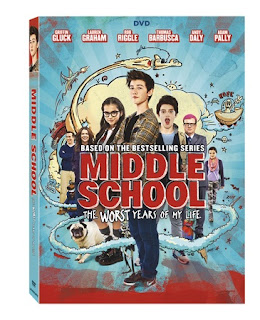 Rafe has an epic imagination…and a slight problem with authority. Both collide when he transfers to a rule-crazy middleschool. Drowning in do’s and don’ts, Rafe and his best friend Leo hatch a plan to expose the principal by breaking every rule in the school’s Code of Conduct. As the principal strikes back, Rafe’s world, at home and at school, explodes into hilarious chaos (both real and imagined) in this laugh-filled family comedy based on James Patterson’s best-selling book series.

Middle School: The Worst Years of My Life is directed by Steve Carr with screenplay by Chris Bowman & Hubbel Palmer and Kara Holden. Executive produced by James Patterson and Steve Bowen. Produced by Leopoldo Gout and Bill Robinson.

My little guy is 9 and loves all thins James Patterson!  And as a mom I love sharing these stories with him.  They make him laugh and helps him to use his imagination.  When I realized that Middle School The Worst years of my Life was based on a JamesPatterson Series I just knew my son had to have it.  This is a laugh out loud film that will have the whole family giggling.  I like that the humor is just good fun for both adults and kids.