Disclaimer:  I was given products in this post for the purpose of review.  I was not paid to write this review, all opinions are my own

I remember as a little girl always watching the Smurfs and Snorks!  They were 2 of the best cartoons on tv :)
I'm kind of impressed that 20+ years later the Smurfs are still going strong and a children favorite!
The all new movie Smurfs: The Lost Village was just released last week

SMURFS: THE LOST VILLAGE is also available on July 11 in THE SMURFS 3-MOVIE BLU-RAY COLLECTION, which includes The Smurfs and The Smurfs 2. 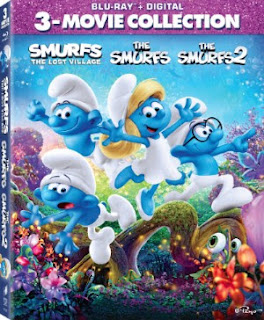 Synopsis:
In this fully animated, all-new take on the Smurfs, a mysterious map sets Smurfette and her best friends Brainy, Clumsy and Hefty on an exciting and thrilling race through the Forbidden Forest filled with magical creatures to find a mysterious lost village before the evil wizard Gargamel does. Embarking on a rollercoaster journey full of action and danger, the Smurfs are on a course that leads to the discovery of the biggest secret in Smurf history!


My boys and I have officially watched this movie every single night since it arrived in my mailbox!  It starts off by telling you the name of some Smurfs, Brainy Smurf because he is smart, nosy Smurf because he is Nosy, Clumsy Smurf because he is Clumsy and so on.  Then you get to Smurfette and they can't really figure out what her thing is!  In a beautiful adventure where the Smurfs save the day we find out exactly what a Smurfette is.  This is a great story about friendship, working together and doing the right thing.  And it is also a story about being who you are.