Disclaimer:  I was given products in this post for the purpose promoting.  I was not paid to write this review.
Zippo partners with Kingsman: The Golden Circle 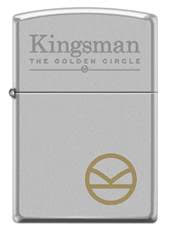 ABOUT ZIPPO MANUFACTURING COMPANY
One of the most recognized brands in the world, Zippo was founded in the fall of 1932 by George G. Blaisdell in Bradford, Pennsylvania, where it has manufactured over 550 million windproof lighters. With the exception of improvements to the flint wheel and modifications in case finishes, the product remains unchanged and is backed by the company’s famous lifetime guarantee – "It works, or we fix it free.™" Zippo’s diverse product line includes lighters and accessories; butane candle lighters; fragrance, and a robust line of heat and flame products for outdoor enthusiasts.  Zippo markets in over 180 countries, and owns Bradford-based W.R. Case and Sons Cutlery Company and the Ronson family of brands. For more information, visit zippo.com.

About Kingsman: The Golden Circle
In 2015, Kingsman: The Secret Service introduced the world to Kingsman, an independent, international intelligence agency operating at the highest level of discretion whose ultimate goal is to keep the world safe. In Kingsman: The Golden Circle, the heroes face a new challenge when their headquarters are destroyed and the world is held hostage. Their journey leads them to the discovery of an allied spy organization in the US called Statesman, dating back to the day they were both founded. In a new adventure that tests the agents’ strength and wits to their limits, these two elite secret organizations band together to defeat a ruthless common enemy in order to save the world.