I Survived the American Revolution, 1776

Disclaimer I was given products in this post for the purpose of review.  I was not paid to write this review.  All opinions are my own

My son loves to read!  Several nights a week I go back to bed a little early so I have time to curl up in bed and read of few chapters of whatever book I am in.  And my son has now gotten into the habit of doing it too.  It is really cute because I have two pillows I put behind my back&neck and one I sit across my lap so I can rest my book on top.  My son watched me do this so he now has the same set up.  I even stuck a night light on the other side of my bed so he can turn his on just line mine.  We read for maybe an hour and then normally head to bed.  I love this tradition and the fact that my son is so into reading and does it for joy and not just for homework!

One of his favorite series is the I Survived books. Each is set at a different place and with different characters and they survive something that took place through out history.  The latest in the collection is I survived the American Revolution 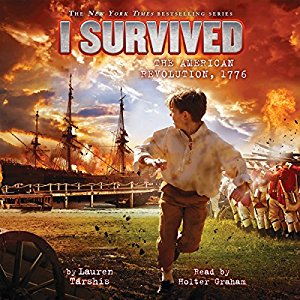 Best-selling author Lauren Tarshis tackles the American Revolution in this latest installment of the groundbreaking, New York Times best-selling I Survived series. The battlefield was soaked in blood. Screams of injured soldiers rang through the air. Eleven-year-old Nathaniel Knox knelt behind a rock, his gun clutched in his shaking hands. Nate had been heading to New York City to find his father. But now he was trapped in a terrible gunfight between American and British troops. This Revolutionary War had started as a thrilling fight for freedom. The 13 American colonies were breaking apart from England, away from King George III. The colonies would band together to become a brand-new country: The United States of America! But King George was like a snake with America gripped in his fangs - and he didn't want to let go. So now it was war - brutal, bloody war. And America was being crushed by the mighty British army. Thousands of American troops were either dead or dying in filthy British prison ships. General George Washington's army was in tatters. All Nate wanted was to find his father...and to get out of here alive

Now the story is not real, this isn't really a Nate looking for his father in history.  But the author does use real facts to make the story.  My son is always so enthralled and after he finishes a book he asks me all sorts of question and wants to know even more.  I was impressed that even I learned a few things.

The story line is fun and quick.  My son will be 10 in 2 weeks, I think 2nd-7th grade is the perfect age group for these books (Please note my son was a pretty advanced reader in 2nd grade so I may be a little off here)  There is no gory stuff so I never have to worry about him reading something he shouldn't.  It gives the harsh history facts without scaring him.