Okay readers it is time for me to admit something...  I am a nerd, my hubby is a nerd, my kids are nerds and even my dog is a nerd.  We came to this realization one year when we told another family we were going to have our annual Harry Potter marathon.  After a few weird looks the mom of the family asked us what the heck do we mean annual Harry Potter marathon.  I explained it to her, you know thinking she was the weird one!  She told me other families don't do that!  I was in shock!  I wanted to see just how weird we were, so I then asked her "When we get snow storms do you stand on your  deck and pretend to be John Snow and that the kids are part of the night kings army.  So you have to throw snow balls at them to try and destroy them before they get to the wall."  She looked at me like I grew two heads.  So on I went, "So let me get this straight you have never gotten out your nerf guns and ran around the yard shooting random targets, pretending they were zombies and the governor!  And you had to kill them all to get back to Rick and Daryl"  "You never gave your kids a duster and told them "May the force be with you."  "You never grab something and said in a creepy voice 'my precious'"
As her face slowly started to drop, I realized I had to stop or they would never let their kids around my kiddos again.  But I did learn that day my family is a bit nerder then most.  But that is okay, I wouldn't change us!

With that said I am super excited to tell you all about The Collectors Case
Monthly themed, nerd filled subscription cases filled with 4-6 items including your chance at a celebrity autograph and bonus items! The value of each case exceeds more than $60 - however you can get your hands on a case for just $25! Give the gift any nerd will love - pick a theme and order today!!

The one I received has 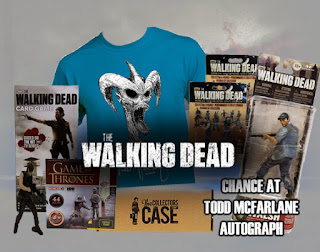 Game of Thrones construction set -  Build-able Banner pack with figures.
The Walking Dead card game- The ultimate card zombie survival game
The Walking Dead COLLECTIBLE FIGURES - You never know who you are going to get!
The Walking Dead Shane Walsh figure - I didn't get a signed figure, but some people do!!
and a TEE SHIRT DESIGNED BY Todd Mcfarlane - This is exclusively for the Collectors Case!

To learn more you can check out my link below:
The Collectors Case