Despicable Me 3 arrives on DVD AND BLURAY just in time for the holidays!!
The Special Edition release of Despicable Me 3 comes with an all-new mini movie and over an hour of bonus content including a never-before-released deleted scene, and so much more! It arrives on Digital and Digital 3D on November 21, 2017 and on 4K Ultra HD, Blu-ray™, DVD and On Demand on December 5, 2017 from Universal Pictures Home Entertainment. 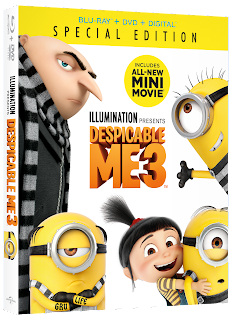 The characters beloved by everyone – Gru, his wife Lucy, their three adorable daughters—Margo, Edith and Agnes—and the Minions provide hours of family fun in this heartwarmingly subversive comedy from Academy Award®-nominated producer Chris Meledandri (Despicable Me Franchise) and directors Pierre Coffin (Despicable Me Franchise) and Kyle Balda (Minions 1 & 2, The Lorax). Hailed as “the best Despicable Me movie yet,” by Ali Plumb of BBC Radio 1, with over $949 million in global ticket sales, Despicable Me 3 is the ultimate holiday gift, with almost an entire hour of exclusive bonus features including an all-new mini-movie, a never-before-released deleted scene, and much more!

Despicable Me 3 will be available on 4K Ultra HD in a combo pack which includes 4K Ultra HD Blu-ray™, Blu-ray™ and Digital. The 4K Ultra HD will include all bonus features on the Blu-ray™ disc.
BONUS FEATURES EXCLUSIVE TO 4K ULTRA HD, BLU-RAYTM, DVD & DIGITAL:


My boys and I actually got to see this movie in theaters.  We loved it so much though that they kept begging me buy it when it released.
Here is what we loved:
The story line as always is cute and easy to follow.  You of course have your villain, Balthazar Bratt.  Just like the other Despicable Me movies the villain is more funny than bad.  With his cheesy one liners and even dorkier "weapon" my kids were loosing it nonstop.  He tries to destory Gru and gang with a giant bubble lol

Gru gets to meet his long lost brother Dru, who just happens to have a glorious full head of hair.  To provided much torment for Gru, but added much laughter for everyone else.

The girls of course are as sweet as ever.  Agnes is determined to find a unicorn in this movie...  AND SHE DOES... well kind of.  I wont spoil it, but I can promise you will giggle.

And finally the Minions, it wouldn't be a Despicable Me movie without them.  Well in this movie they go to jail, build a plane, escape jail and even have one heck of a singing/dance number.

I like that we get to see all the characters grow.  Even the minions do some personal growth in this movie.  For anyone that followed the movies so far, you do not want to miss this one.  The ending suggest we may see more for this beloved series.