Disclaimer:  I was given products in this post for the purpose of review.  I was not paid to write this review  All opinions are my own

Smashers
Get ready to smash the ball & collect ‘em all with Smashers – the hottest new collectables from ZURU! Smashers have over 100 wacky collectable characters, which can only be found in the innovative Smashball that puts the action right in your hand! Smash open the Smashball to reveal your character hidden inside. Smashers Series 1 is all about sports and includes both “good and bad” sports characters, along with limited edition and very rare figures to find and collect!
Battle against the Bad Sports to earn Smash Points and become a Smasher Elite! Just throw, smash, and surprise! The line includes the Smasher 1-Pack
Smasher 3- Pack with 2 Smashers hidden in Smashballs
and the Smasher 8-Pack with 6 Smashers hidden in Smashballs 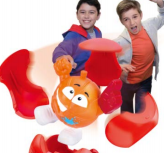 The Smashers Tin comes in two versions, Football and Basketball, and contains a Limited Edition Smasher (SRP $7.99), and the Smashers Team Bus also comes in two versions, Football and Basketball, and contains 2 Limited Edition Smashers.
Okay I have a 7 year old and a 10 year little boys.  When I had them something and tell them to smash it watch out!  Both of their eyes lite up with a naughty glee before they let lose and started to smash those little balls on the floor!  Afterwards they would run forward to see what little surprise awaited them inside.  After they were done smashing I gave them the Basketball court/vehicle so they could take turns launching their new toys into a hoop (It also works as a holder for the smashers)  My boys LOVE them.  Not only was it fun to smash they open, but they also love the surprise aspect and the fact that they could play with them afterwards!

But wait not wasn't the only toy we got to try.  My kids always love "surprise" type toys when you just never know what is going to be inside.  That is why 5 surprise is perfect for them.
5 Surprise Surprise...it’s 5 Surprise!

This new collectible line from ZURU harnesses the anticipation and excitement of “unboxing” a surprise combined with the addictiveness of collectables. Unwrap, peel, reveal! Kids will love opening their 5 Surprise capsules almost as much as the toys inside. Wave 1 will feature over 300 toys in pink and blue capsules with additional waves introducing 100 new toys every six months. There are five different themed segments with a HUGE range of boys and girls toys, resulting in thousands of combinations of surprise toys, making 5 Surprise the coolest, most unique capsules ever!
You get a baseball size ball with 5 small toys inside.  When you open your toy there is orange type slices that you need to open and see what treasure lays within.  My only complaint is we pretty much got the same toys :(  I was thinking since we got several balls they would all be different, but most of the little toys were the same.