Disclaimer:  I was given products in this post for the purpose of review.  I was not paid to write this review  All opinions are my own.

I have two little boys Brandon is 10 and Quinn is 7.  It use to be so easy finding things that they both like.  Now it is getting tougher!  My oldest is too grown up for the really kiddy stuff and my youngest is still really into it.  That is why I love movies like COCO.  It is fun enough to keep my youngest smiling and dancing, but also has that sense of maturity that my oldest is starting to crave!!

COCO IS the story of a 12-year-old aspiring musician’s extraordinary journey to the magical land of his ancestors Now this vibrant tale filled with love and laughter arrives home Digitally in HD and 4K Ultra HD™ and on Movies Anywhere on Feb. 13, and on 4K Ultra HD,™ Blu-ray,™ DVD and On-Demand on Feb. 27. 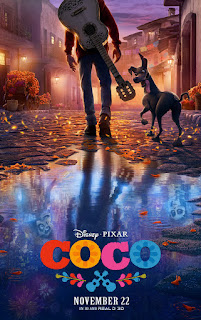 
·         Deleted Scenes with Introductions - Director Lee Unkrich and co-director Adrian Molina talk about the deleted scenes and the part they played in the development of “Coco.”


o    The Way of the Riveras - A musical number in which Abuelita and Miguel prepare their Día de los Muertos celebration while she teaches him Rivera family history and traditions.


o    Celebrity Tour - Héctor, a Land of the Dead tour bus guide, agrees to help Miguel, revealed to be a living boy, on his quest to find de la Cruz.


o    The Bus Escape - The Rivera family catches up to Miguel and Héctor and attempts to halt their mission to find de la Cruz.


o    Alebrije Attack - Miguel and Héctor are interrupted on their journey to find de la Cruz by a fierce alebrije.


o    The Family Fix - After de la Cruz reveals his true colors, the Rivera family puts their dismay aside and comes together to repair the smashed guitar needed to send Miguel home.


o    To the Bridge - As the Land of the Dead counts down to the end of Día de los Muertos, Miguel and de la Cruz come head-to-head on the marigold bridge.


·         The Music of “Coco” - Collaborating with musicians of Mexico and some unique instrumentation, this documentary explores the beautiful fusion of music essential to the story of “Coco.”


·         Paths to Pixar: “Coco” - Explore how the film crew’s personal stories resonate with the themes of the movie itself.


·         Welcome to the Fiesta - A musical exploration of the skeletons that make the Land of the Dead in “Coco” so wondrous and intriguing.


·         How to Draw a Skeleton - Pixar artist Daniel Arriaga gives a lesson on the quick and easy way to draw skeletons using simple shapes.


·         A Thousand Pictures a Day - Join the “Coco” crew on an immersive travelogue through Mexico, visiting families, artisans, cemeteries, and small villages during the Día de los Muertos holiday.


·         Mi Familia - Developing the Riveras was a labor of love that took the cast and crew on a deep dive into the meaning of family.


·         Land of Our Ancestors – Watch Pixar artists lovingly construct layer upon layer of architecture from many eras of Mexican history, bringing the Land of the Dead to life.


·         Fashion Through the Ages – The cast of characters in “Coco” are from many different eras, making for some magnificent costuming opportunities.


·         The Real Guitar – The majestic guitar that spurs Miguel on his journey through the Land of the Dead is a unique creation. Watch as it is initially designed by a Pixar artist and ultimately realized as a real instrument by a master luthier in this poetic ode to craftsmanship.


·         Dante - How the crew fell in love with the uniquely Mexican breed of Xoloitzcuintli (or “Xolo”) dogs that inspired Dante.


·         How to Make Papel Picado - Join Pixar artist Ana Ramírez González as we learn how papel picado is made traditionally, and then try your own approach to this beautiful art form.


About “Coco”
In Disney•Pixar’s “Coco,” Pixar Animation Studios’ 19th feature film, Miguel (voice of newcomer Anthony Gonzalez) dreams of becoming an accomplished musician like his idol Ernesto de la Cruz (voice of Benjamin Bratt)—despite his family’s baffling generations-old ban on music. Desperate to prove his talent, Miguel finds himself in the stunning and colorful Land of the Dead following a mysterious chain of events. Along the way, he meets charming trickster Héctor (voice of Gael García Bernal), and together, they set off on an extraordinary journey to unlock the real story behind Miguel's family history.
MY REVIEW:
In high school I took 2 years on Spanish.  Not only was I taught their beautiful language, but I also learned quite a bit about their culture.  The Day of The Dead was always so fascinating to me.  Just the way this beautiful culture honored their ancestors .  Disney's COCO did an awesome job showing what this day is really about.  I loved watching it with my kiddos.  Not only was the story line great, but it also got my kiddos asking questions!  The characters were likeable and had depth.   I also love that COCO taught us morals.  A long time ago, Miguel's great-great-grandmother, matriarch Imelda (Alanna Ubach) was married to a musician who left her and their young daughter high and dry! He left and never returned.

Imelda turned to shoe-making to support herself and her daughter, and she turned shoe-making into a family business. She also began a ban on any and all music in the family - no singing, no guitar-playing, no musicians!
And she enforces this rule always!

But all poor Miguel wants is to play his music and pursue his dreams. Miguel does practice in secret though, watching old movies of the great Ernesto and teaching himself how to play, and decides against his Grandmothers wishes to enter a talent show for the Day of the Dead. Several events however result in Miguel stealing Ernesto's guitar from the mausoleum, and the next thing he knows is that he's suddenly an invisible ghost to the living - but the returning dead can see him and he can now see them. Which in turn sets him on a journey across a mystical bridge from the land of the living to the land of the dead, a wondrously beautiful place but one from which he must quickly find a way to return before he ends up becoming one of the dead himself and having to stay there forever. He's helped along the way by a down-on-his-luck denizen named Hector (Gael García Bernal), who's in danger of being forgotten, and a number of other characters he encounters. His quest ultimately requires him solving a generations-old mystery and setting right a wrong that occurred long before he was born. 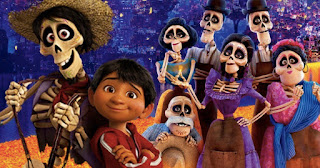 We loved it!  It is a must watch movie for all families.