The quickest way to get me interested in a movie is to tell me Jennifer Lawrence is in it.  I adored her in The Hunger Games, and I just feel like any role she plays she nails it.  Such was the case in her all new movie The Red Sparrow 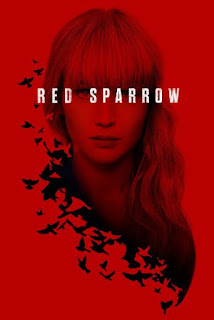 Who can you trust? Twentieth Century Fox Home Entertainment presents a suspense-driven spy drama RED SPARROW available on Digital and Movies Anywhere today. In this international spy thriller, Academy Award® Winner Jennifer Lawrence is Dominika, a former ballerina forced to enter Sparrow School, a secret government program that thrusts her into a treacherous espionage game between Russia and the CIA. She emerges trained as a lethal agent, but is trapped in a world she desperately wants to escape. Red Sparrow "twists and turns until the shocking conclusion" (Andrew Freund, Dish Nation, FOX-TV) – you will not see coming. Director Francis Lawrence (Hunger Games: Catching Fire, Mockingjay Parts 1 & 2) reunites with in this edge-of-your-seat spy thriller. RED SPARROW includes over 90 minutes of bonus material that takes you inside the making of the film, exploring real-life source material with the author, cast commentary, deleted scenes and much more.

SPECIAL FEATURES
So here are a few of the things I love
Great story line -  I felt like I was kept on the edge of my seat the entire movie.  And everytime I thought I had something figured out there would be a new twist.  Not just some random twist, but a twist that made sense and enriched the story!
Great acting - I know it was just a movie, but I felt the actors/actresses really got into their role.  Nothing felt forced.
Characters -  So many of them had great story lines and even after the movie was over I felt myself wanting to know where they ended up.  They were all interesting and watching them interact is what made this a great movie

I do want to mention this movie is def. not for kids!  There is some parts that can be hard to stomach even for an adult.  But if you are into action packed movies, that keep you guessing this one is def. for you