Disclaimer   I was given products in this post for the purpose of review.  I was not paid to write this review.  All opinions are my own

Every time I go to my dad's house I get a short history lesson.  And he never repeats a lesson!  My dad sits for hours watching documentaries and history shows.  I never mind though, because I myself am very interested in all things history.  The reason I am telling you this is because Father's day is literally only a few days away and the time to shop is all but gone, but don't worry dear readers I got you covered :)... Well only if your dad likes history like my dad

PBS offers a huge selections of historical  dvd sets.  I decided to review The Vietnam War set.  It has over 1080 minute of content!  Perfect for my history buff dad!
THE VIETNAM WAR: A FILM BY KEN BURNS AND LYNN NOVICK 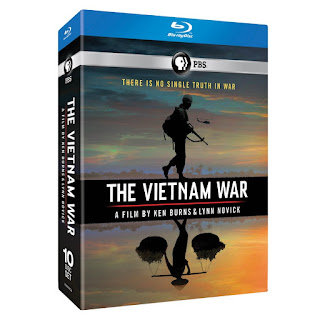 Ken Burns and Lynn Novick’s ten-part, 18-hour documentary series, “THE VIETNAM WAR” tells the epic story of one of the most consequential, divisive, and controversial events in American history as it has never before been told on film. Visceral and immersive, the series explores the human dimensions of the war through revelatory testimony of nearly 80 witnesses from all sides -- Americans who fought in the war and others who opposed it, as well as combatants and civilians from North and South Vietnam. The series includes rarely seen, digitally re-mastered archival footage from sources around the globe, photographs taken by some of the most celebrated photojournalists of the 20th Century, historic television broadcasts, evocative home movies, and secret audio recordings from inside the Kennedy, Johnson and Nixon administrations. “THE VIETNAM WAR” features more than 100 iconic musical recordings from greatest artists of the era, and haunting original music from Trent Reznor and Atticus Ross as well as the Silk Road Ensemble featuring Yo-Yo Ma.