Disclaimer:  I was given products in this post for the purpose of review.  I was not paid to write this review, all opinions are my own.

I don't know how many of my readers live near my part of this world.  I live in a small tall right along the east coast of PA.  And for the past week we have been getting hit pretty heavily with rain!  Thankfully my family isn't in the area of Hershey where they had disastrous flooding, but we did get our fair share.  We live right next to a creek and when the water gets high and fast enough it is pretty dangerous.  I have been keeping my boys inside.  Sadly that means a lot of pent up energy.  So I turned our living room into a pretend camp site and we hunkered down for a tv/movie marathon!
One of the shows we watched was 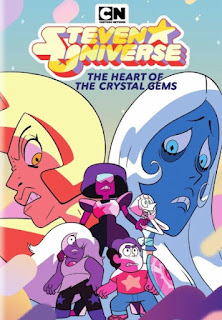 Fans everywhere can now take home the most talked-about adventure of the critically-acclaimed Cartoon Network original series when Steven Universe: The Heart of the Crystal Gems arrives on DVD August 14. The series will never be the same after the jaw-dropping revelations of this explosive story arc.

Including 5 episodes from last week’s linear event (one of which is extended) plus 5 additional episodes, this DVD collection allows viewers to revisit the moments when the Crystal Gems are falling apart over revelations about Rose Quartz and it’s up to Steven to bring the team back together. Steven Universe: The Heart of the Crystal Gems will retail for $14.97 SRP.

Additionally, fans can celebrate the emotional moments of Steven Universe: The Heart of the Crystal Gems through a limited consumer product collection including key chains, t-shirts, wristbands, socks and more, which will be available at retail beginning this month.

Finally, two music tracks from select episodes are also available now for download from digital music stores including iTunes, Google Play and Amazon, as well as on all major streaming platforms including Spotify, Tidal, Pandora and others:

​Cartoon Network’s Emmy-nominated Steven Universe revolves around Steven, the “little brother” to a team of magical aliens—the Crystal Gems—who defend the planet Earth. Steven is the son of the Crystal Gems’ late leader Rose Quartz and aging aspiring rockstar Mr. Universe. Steven belongs everywhere and nowhere: he has inherited his mother’s Gem and her magical powers, but also his father’s humanity and charm. The show is a slice-of-life action comedy that follows Steven as he attempts to bridge the gap between the sci-fi fantasy world of Gems and the cozy, funny, simple-yet-extraordinarily-complicated world of human beings. Steven Universe is created by Emmy and Annie Award-nominated writer and New York Times bestselling author Rebecca Sugar, and produced by Cartoon Network Studios.

Steven Universe: The Heart of the Crystal Gems DVD episodes: