The Chicken Runs at Midnight 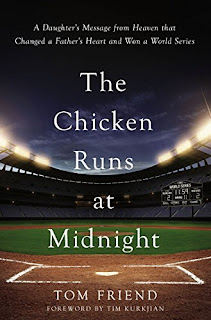 Rich Donnelly was a minor league catcher who never quite got the chance to play in the big leagues. So he became obsessed with reaching the Major Leagues as a coach. While climbing the ladder to his dream job as third base coach for the Pittsburgh Pirates, he became mostly an absentee father who was eventually divorced by his wife. Worse yet, he had a falling out with his only daughter, Amy, who was unafraid to tell her father where he fell short and how he could improve.
Then it happened. In March of 1992, seventeen-year-old Amy called her dad to tell him she was going to have brain surgery. A tumor had been found. In October, Rich invited her to Game Five of the 1992 NLCS between the Pirates and the Atlanta Braves. That’s when an unlikely cheer was born. From the stands, Amy observed her dad yelling instructions to the runners on second base and jokingly asked him afterwards if he was telling them, “The chicken runs at midnight.”  The saying stuck. In late January of 1993, Amy died, but not before her dad and her three brothers had let the battle cry be etched into their lives. It stood for never giving in. It stood for challenging your obstacles. It stood for Amy.
Rich renewed his life of faith, speaking out for God and what he could do in a person’s life if the person paid attention. Four years later, in 1997, after Coach Donnelly had become third base coach for the Florida Marlins, he and his sons brought the battle cry of the chicken with them. That year, the Marlins reached the World Series against Cleveland, a classic that culminated with a seventh game that went extra innings. And the Marlins won that final game when a player nicknamed “Chicken” crossed home plate at exactly twelve midnight. The chicken had run at midnight.
The Chicken Runs at Midnight will make you thrill to victory, believe in hope, stand up to cheer for what is good in peoples’ lives, and conclude that God can work in the life of any person, even through his mistakes, even when he’s not paying attention, even when he thinks it’s too late to turn around.

We are all guilty of mismanaging our lives.  I am the mom of two little boys and I admit sometimes I put things that don't really matter before them.  For example when my grandmother is going to visit I make everyone's life hell trying to make he house perfect.  Sometimes it is just little things like that and other times it is major things.  Rich made the same mistakes many of us our guilty of making, but it wasn't until he found out his daughter Amy was getting brain surgery that he turned his life around.  Remembered what really matters.
This book is about Rich's life story, but as I was reading I felt it was more about Amy.  Amy is brave and sweet and no matter what life throughs at her she stays the same happy person.  Everyone else may read this story and see it as Rich's redemption story I read it and saw a story of Amy's unwavering courage and strength.  She is a great reminder to all of us about love, forgives and kindness