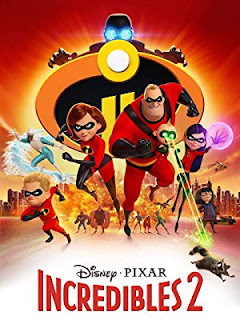 Helen is called on to help bring Supers back, and Bob must juggle the daily heroics of home life. But when a new villain arises with a sinister plot, the Parrs meet the challenge together!

I have to admit that my boys and I were 3 of the first people in line to see this movie in theaters!  We waited so long for a part two and were not willing to wait an longer.

My kids LOVED it!  So the movie starts with our heroes still very much in hiding.  But it is time to come out and with the help of a very rich ally the are able to do so.  But Bob is disappointed when they ask Helen to be their poster child and not him.  Helen needs to face a villain that has a secret plot against super heroes.  That has lots of twists and turns.  And even though I enjoyed watching he be in the lime light the real hero of the day was Bob.  He picked up the role of both mom and dad and it was adorable watching him try to fill that role!

So much was going on and the more he tried to help the worse it got and not to mention of all the times to come into his powers JackJack did when mom was away!  Even though the main story is bring the heroes back the underlying story of family makin sacrifices and working together was touching and was the plot that held the movie together.

This was a super cute movie and even though I wont say it is going to go down a Disney classic I do want to say it is def. worth watching.