I was given products in this post for the purpose of review  I was not paid to write this review.


My family loves getting together and watching movies.  We actually have movie/ game night at least once a month.  Some times we argue over what movie to watch my kids like cartoons, my dad and brother like documentaries/war movies, my mom and sister like loves stories and I like action/fantasy (xmen, 300, ect)
No matter what though we always get together.  Every year for Christmas I always get my family members a movie or series of some sort.  My favorite place to shop for them is Mill Creek Entertainment.  Their prices are awesome and they have a great mixture of old and new.

This year I was able to review 3 titles: 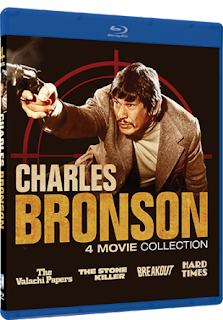 Internationally acclaimed action star, Charles Bronson, is the definitive on-screen “tough guy.” His legendary status was solidified in the midst of his career with a series of leading roles in gritty, crime dramas. This action-packed collection showcases his diverse career with 4 knockout films! THE VALACHI PAPERS (1972) - The cold-blooded, no holds barred, adaptation of Joseph Valachi's explosive testimony while in prison that exposed unthinkable mob activity in the United States. THE STONE KILLER (1973) - Crime drama about a tough New York cop who discovers that a gangster is planning a massacre; revenge for a shootout which introduced non-Sicilian elements to organized crime. BREAKOUT (1975) - A Texas bush pilot is hired by a woman to help break out her husband who is imprisoned in Mexico on a framed charge that was engineered by his Grandfather. HARD TIMES (1975) - Walter Hill's directorial debut is a raw, bare-knuckled view of street brawlers starring Bronson as a quiet but brutal fighter supported by a chatty and sly promoter played by James Coburn. 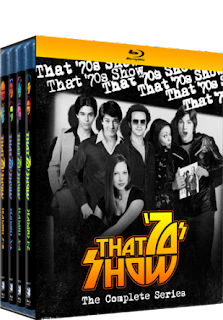 Your favorite suburban kids from Wisconsin are making their way back to the basement in this definitive collection featuring all 200 episodes in Widescreen High Definition, remastered from the original film negatives for an awesome Blu-ray experience with surround sound audio! So climb into the Vista Cruiser with Eric, Donna, Kelso, Jackie, Hyde, and Fez for a trip back to the '70s. Featuring: Ashton Kutcher (Netflix’s The Ranch), Topher Grace (Interstallar), Mila Kunis (Bad Moms), Wilmer Valderrama (CBS’s NCIS), Laura Prepon (Netflix’s Orange is the New Black), Danny Masterson (Netflix’s The Ranch)
ScarlettThe Sequel to Margaret Mitchell's Gone With The Wind by Alexandra Ripley 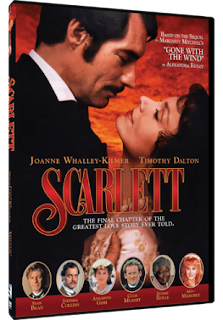 carlett, the mini-series based on Alexandra Ripley’s best-selling sequel to Gone With the Wind, takes up precisely where that story left off, and sees Scarlett O’Hara off on a journey from Atlanta to Charleston and Savannah, to London, and to her ancestral home of Ballyhara in Ireland. The motive force behind the story is once again the turbulent romance between Scarlett and Rhett Butler. Separated from Scarlett and seeking a divorce, Rhett is now pursued passionately by his wife, who seeks a reconciliation. Frustrated in her effort and unwilling to win Rhett by telling him she is pregnant with their child, Scarlett leaves for Ireland, where she is caught up in the political upheaval of the day, and to England, where she must stand trial for a murder she did not commit. In a dramatic climax, Rhett rushes to Scarlett’s side, knowing that she needs him and that her life is at stake. Helping to win her acquittal and finally apprised that they have a son, Rhett reunites with Scarlett, conceding that he never stopped loving her. Scarlett continues what is unarguably the most celebrated story of the American cinema, with all the richness of the original and with an epic sweep that today is seen only in long-form television.