Disclaimer:  I was given a digital copy of this game to review and give my honest feedback 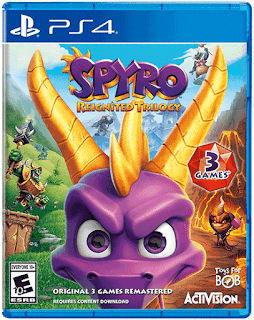 PRODUCT DESCRIPTION:
Spyro is back and bringing the heat in the SpyroTM Reignited Trilogy game collection. Now fanscan rekindle the fire with the beloved video game icon like never before in the original three
games that ignited a phenomenon, SpyroTM the Dragon, Spyro2: Ripto's Rage! and Spyro Year of the Dragon. Featuring the same sick burns, same smoldering attitude and now all scaled up in
stunning HD, players will enjoy this classic platformer that’s loaded with an incredible amount of new detail and improved graphics like it’s the first time. Also, Stewart Copeland (The Police),
the original composer of the Spyro franchise soundtrack, is back with new music for fans of the

KEY TRILOGY FEATURES:
 Unleash the Dragon – The purple dragon that stole gamers’ hearts 20 years ago is back and looking more fly than ever in scaled-up HD graphics. Explore the expansive realms, re-encounter the fiery personalities and relive the adventure in fully remastered glory.
Massive Collection – The Spyro Reignited Trilogy lets players glide to new heights, unleash fire-breathing attacks, and explore lush environments filled with new detail bringing the
Dragon and Avalar realms to life in more than 100 levels from the first three games. Each level in Spyro Reignited Trilogy is mapped faithfully from the originals, only now re-imagined with modern mechanics to give fans an excellent gaming experience.
 Gnostalgia n’ More – This is the Spyro with swagger and personality that fans remember from their childhood. Returned and remastered Orb Challenges, mini-games and more make this an epic trilogy for the diehard Spyro-maniacs!
 So Fly – The game collection is stunning, lush, and fiery! The Spyro Reignited Trilogy introduces players to a completely remastered game collection with a re-imagined cast of
characters, brand-new lighting, animations, environments, and recreated cinematics—all in stunning HD.
 Fresh Controls, Original Adventure – The trilogy breaks free from the gameplay chains of the ‘90s with updated controls, dramatically silky-smooth game camera handling, and full
analog stick support for added flavor in this one-of-a-kind adventure.
 Did You Hear That? – Fans of the Spyro games may recognize some familiar sounds in Spyro
Reignited Trilogy. Tom Kenny, the original voice actor in Spyro 2: Ripto's Rage!, and Spyro:
Year of the Dragon and fan-favorite reprises his role as the voice of Spyro. The new collection also remasters Stewart Copeland’s original soundtrack from the first three games, but also
includes an all-new track from Copeland, entitled “Tiger Train.” Spyro Reignited Trilogy introduces an option that will allow fans to switch between the original and remastered music
from the in-game menu.
ORIGINAL STORYLINES:
 Spyro the Dragon – Gnasty Gnorc has returned from exile and has unleashed evil magic on the Dragon Realms, trapping the dragons in crystal and raising an army of Gnorcs. Spyro,
with his friend Sparx the Dragonfly, is the only dragon left who can traverse the six Homeworlds, free the dragons, and save the day. Guide Spyro as he glides through the
Dragon Realms, toasting colorful enemies with his fiery breath and encountering countless puzzles and adventures along the way.
 Spyro 2: Ripto’s Rage! – Spyro has been brought to the land of Avalar to defeat the evil sorcerer Ripto who has brought war to Avalar’s Homeworlds. Each Homeworld is being held
captive by Ripto and his minions and it's up to Spyro to defeat them and bring peace to
Avalar’s realms. In this adventure, Spyro powerflames, supershots, and headbashes his way through enemies while completing unique challenges such as herding strange beasts, target
shooting, and defeating ravenous dinosaurs.
 Spyro: Year of the Dragon – The Dragon Realms are celebrating the ‘Year of the Dragon’
when a mysterious cloaked figure emerges to steal all the Dragon Eggs. Under the spell of the evil Sorceress, an army of Rhynocs is now guarding the helpless eggs in the Forgotten
Realms. With new and old friends, Spyro is on a quest to recover the lost eggs, defeat the
Rhynoc army, and stop the evil Sorceress. Turn up the heat in this adventure by exploring the mysterious realms and completing outrageous challenges, such as pulling off sick tricks
on a skateboard and stepping into a boxing ring.