Disclaimer:  The items in this post were given to me for the purpose of review.  I was not paid to write this review, all opinions are my own.

I'm sure I am not the only parent who has a car dvd player, I call mine my sanity savoir.  Yes my kids use to drive me nuts in the car now they watch videos.  Here is the irony though, now I drive them crazy!  Last week the were watching Lego Ninjago the movie and I was up front and kept asking if they bad guy knew the Green Ninja was his son yet.  I could tell my kids were getting tired of me asking lol  It is tough to be able to hear what is going on but not see!
Sadly that entire paragraph has little relevance to my post(besides the Ninjago part), but I thought I would share it :)  I'm sure someone else out there has the same struggle lol

My boys do really enjoy the Ninjago series, it is one of our top watched DVD'S in the car.  Which is why I was excited when I realized I was going to get to review Lego NINJAGO Lloyd's Journey 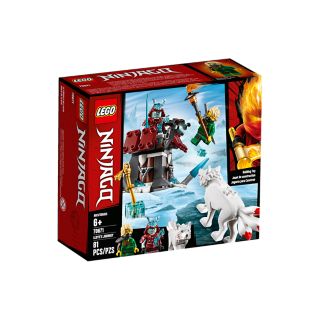 Stage an epic ice battle matching Lloyd and his wolf against Blizzard Warrior with this action-packed ninja toy for boys and girls. This 70671 Lloyd’s Journey LEGO® NINJAGO® set features Blizzard Warrior's fortress with a shooting crossbow and buildable ice holder for Lloyd's golden sword. Fans of the NINJAGO TV show will love role-playing scenes and creating their own adventures with the 2 LEGO NINJAGO minifigures, a wolf figure and cool ninja weapons in this toy building set.