Scary Stories to Tell in the Dark

Disclaimer I was given a review copy of the movie below.  I was not paid to write this review

Okay readers I need to make a confession...  I'm a sissy when it comes to scary movies, but even worse my fight reactions is stronger then my flight.  Yes I'm total that person that takes a swing when someone says boo
When my kids asked me to watch Scary Stories to tell in the Dark I thought 'I'll be fine!' ....  Several days later I still can't take my pups outside at night.  According to my kids I'm overeating lol! 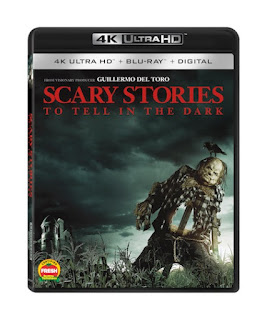 Scary Stories to Tell in the Dark was scary without being "slasher" like.  My oldest son is going to be 12 this Friday and I was okay with him watching it.  If you have kiddos who like scary movies, but you don't want to expose them to the over the top never sleep again type of movies this one is a good start.

ABOUT
Get ready to be absolutely terrified when Scary Stories to Tell in the Dark arrives on Digital October 22 and on 4K Ultra HD™ Combo Pack (plus Blu-ray and Digital), Blu-ray Combo Pack (plus DVD and Digital), DVD, and On Demand November 5 from global content leader Lionsgate (NYSE: LGF.A, LGF.B). The highly anticipated film adaptation of the iconic book series brings the thrills and chills of some of Alvin Schwartz’s scariest stories to life.
Certified Fresh on Rotten Tomatoes, Scary Stories to Tell in the Dark is produced by Academy Award® winner Guillermo del Toro (2017, The Shape of Water, Best Director), with screen story by Guillermo Del Toro and Patrick Melton & Marcus Dunstan, written for the screen by Dan Hageman & Kevin Hageman, and directed by André Øvredal (The Autopsy of Jane Doe, Trollhunter). The film stars Zoe Margaret Colletti (Annie, Wildlife, “Rubicon”), Michael Garza (The Hunger Games: Mockingjay – Part 1, “Wayward Pines,” “Timeless”), Dean Norris (“Breaking Bad,” “Claws,” “Scandal”), Lorraine Toussaint (Selma, “Into the Badlands,” “Orange is the New Black”), Austin Zajur (Fist Fight, “Wonder Pets!,” “Kidding”), and Natalie Ganzhorn (“The Stanley Dynamic,” “Make it Pop”).
It’s 1968 in America. Change is blowing in the wind…but seemingly far removed from the unrest in the cities is the small town of Mill Valley, where for generations the shadow of the Bellows family has loomed large. It is in their mansion on the edge of town that Sarah, a young girl with horrible secrets, turned her tortured life into a series of scary stories, written in a book that has transcended time. For a group of teenagers who discover Sarah’s terrifying home, the stories become all too real in this spine-tingling film.
Take home Scary Stories to Tell in the Dark and immerse yourself in the terrifying world with exclusive special features, including six featurettes on the 4K Ultra HD, Blu-ray and Digital releases and two featurettes on the DVD looking at the development of the creepiest creatures in the film, as well as the process of taking these classic tales from page to screen!  Experience four times the resolution of full HD with the 4K Ultra HD Combo Pack, which includes Dolby Vision, bringing entertainment to life through ultra-vivid picture quality. When compared to a standard picture, Dolby Vision can deliver spectacular colors never before seen on a screen, highlights that are up to 40 times brighter, and blacks that are 10 times darker.
The Scary Stories to Tell in the Dark 4K Ultra HD Combo Pack, Blu-ray Combo Pack, and DVD will be available for the suggested retail price of $42.99, $39.99, and $29.95, respectively.