Come back and play when “IT Chapter Two” arrives on 4K UHD Combo Pack, Blu-ray Combo Pack, DVD and Digital. Evil resurfaces in Derry as director Andy Muschietti reunites the Losers Club in a return to where it all began with “IT Chapter Two,” the conclusion to the highest-grossing horror film of all time. 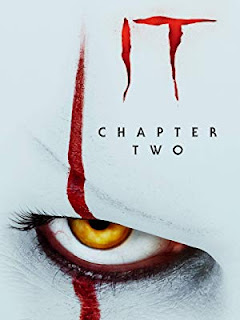 Twenty-seven years after the Losers Club defeated Pennywise (Bill Skarsgård), he has returned to terrorize the town of Derry once more. Now adults, the Losers have long since gone their separate ways. However, people are disappearing again, so Mike (Isaiah Mustafa), the only one of the group to remain in their hometown, calls the others home. Damaged by the experiences of their past, they must each conquer their deepest fears to destroy Pennywise once and for  all...putting them directly in the path of the shape-shifting clown that has become deadlier than ever.
4K, BLU-RAY AND DVD ELEMENTS

My review:
I'm not normally a scary movie watcher, but when I was little my cousin Chris would come over every weekend.  Our thing was to watch IT and then watch Grease (I know weird combo lol)   When the new IT released (was it 2 years ago?) I had to watch.  I was expecting to be let down, the old one was so good.  Thankfully that was not the case!!  The new IT was even better then the old and IT chapter 2 was the perfect finish.  So I do like there was several funny parts, Richie and Eddie scenes are the best!  I like that we flashback a lot to when the Loser Club was younger, it helps to support the character growth.  This is a long movie, but never once did I feel like it was to long.  The movie just flows.
I do have to admit I did not read the book so I cannot comment if the book to movie adaption was correct.