I will received a dvd in exchange for making this post. 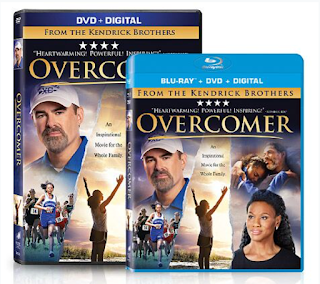 ON DIGITAL NOVEMBER 26 COMING TO BLU-RAY™ AND DVD DECEMBER 17
OVERCOMER is from the creators of the #1 box-office hit War Room. Life changes overnight for coach John Harrison (Kendrick) after he loses his basketball team and is challenged by the school’s principal, Olivia (Shirer), to coach a new sport he doesn’t know or like. As John questions his own worth, he dares to help the least likely runner take on the biggest race of the year. Filled with a powerful mix of faith, humor and heart, this inspirational story will have you on the edge of your seat.
I have seen several movies by the creators of OVERCOMER and I always walk away feeling empowered.  I have a feeling OVERCOMER is going to have the same affect especially since Overcomer is the #1 Inspirational Family Film of 2019 and has 98% audience score on Rotten Tomatoes!

OVERCOMER has runtime of approximately 119 minutes and is rated PG for some thematic elements.

BLU-RAY AND DIGITAL EXCLUSIVE BONUS MATERIALS ● The Heart of Overcomer: See how the heart of Overcomer is grounded in personal growth, faith and identity.
● Creating the Opening Drone Shot: See how the stunning opening drone shot of the film was realized with a lot of ingenuity and a well-organized crew.
● Working with the Kendricks: Watch how Alex, Stephen and Shannon Kendrick found their path to filmmaking through authenticity and faith.
● Looks Behind-the-Scenes of: Editing, Composing, Coloring and Sound Design
● “Enough” (Lyric Video) Featuring Koryn Hawthorne
● Don’t Mess with the Editors: Check out what the editors of Overcomer created on the side for a little fun. BONUS FEATURES
AVAILABLE ON BLU-RAY, DVD AND DIGITAL
● Feature Audio Commentary with Director Alex Kendrick and Producer Stephen Kendrick
● Bloopers & Outtakes
● 10 Minutes of Additional Scenes with an introduction from the Kendrick Brothers.
● The Making of Overcomer: Learn about how the crew worked together with faith and prayer to create this incredible film.
● The Theme of Identity: In this piece the cast and crew discuss what the theme of identity means to them.
● The Power of Forgiveness: Describes why forgiveness is such an important theme of this film.
● “Overcomer” (Lip Sync Music Video) Featuring Mandisa
● Overcomer in 60 Seconds: a quick fun film recap.
● Overcomer Resources Video: Learn more about accompanying resources to help you grow in faith.