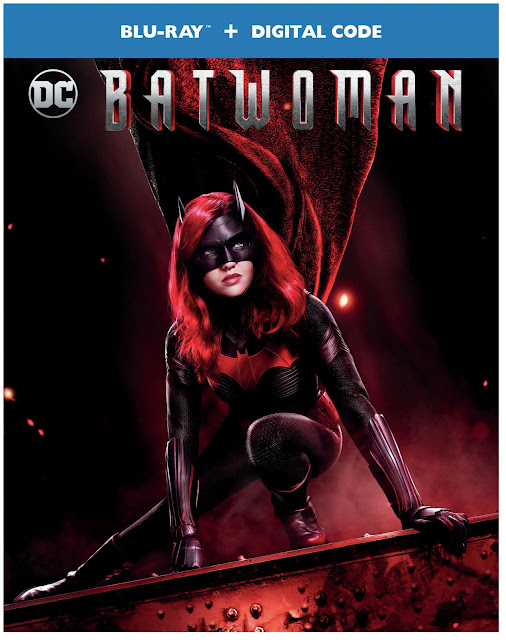 Contains All 20 Exhilarating Episodes from the First Season, Plus All-New Special Features!

Blu-ray includes a Limited-Edition Bonus Disc with All Five Episodes of the DC Crossover Event Crisis on Infinite Earths and 6 Crossover Bonus Features!

The future of Gotham is in her hands with the release of Batwoman: The Complete First Season on Blu-ray and DVD on August 18, 2020 from Warner Bros. Home Entertainment. Strap yourself in for an exhilarating ride with all 20 episodes from the first season, plus The Best of DC TV’s Comic-Con Panels San Diego 2019, deleted scenes and a gag reel.

A limited-edition bonus disc featuring all five DC Crossover Event Crisis on Infinite Earths episodes will be available exclusively for fans who purchase the Blu-ray.

Kate Kane never planned to be Gotham’s new vigilante. After Batman disappeared, Gotham was in despair… until she returned. Armed with a passion for justice and a flair for speaking her mind, she soars through the shadowed streets of Gotham as Batwoman. But don’t call her a hero yet. In a city desperate for a savior, she must first overcome her own demons before becoming Gotham’s symbol of hope.

With Blu-ray’s unsurpassed picture and sound, Batwoman: The Complete First Season Blu-ray release will include 1080p Full HD Video with DTS-HD Master Audio for English 5.1. Featuring all 20 episodes from the first season in high definition, as well as a digital code of the season (available in the U.S. only).

Mine Is a Long and a Sad Tale

Tell Me the Truth

How Queer Everything is Today!

Grinning From Ear to Ear

Off With Her Head

Through the Looking Glass

A Secret Kept From All the Rest

DIGITAL Batwoman: The Complete First Season is currently available to own on Digital. Digital allows consumers to instantly stream and download all episodes to watch anywhere and anytime on their favorite devices. Digital is available from various retailers including iTunes, Amazon Video, Google Play, Vudu, PlayStation, Xbox and others. A Digital Code is also included in the U.S. with the purchase of specially marked Blu-ray discs for redemption and cloud storage.

My review:  I have to give a shout out to Ruby Rose first and foremost.  She does an amazing job in this series!  Even if I didn't like the story line I would keep coming back for more just to see her play this role.  With that being said though I do like the story.  I think this is an amazing installment to the DC tv universe.  And even though Ruby is  my favorite she doesn't have an amazing supporting cast as well.  Each actor really brings their character to life.  There is a lot of great action scenes too.  Overall I think it is a really good show that has a lot of seasons in its future....  At least I hope so!!