How to Forgive When It Feels Impossible by Peter Horrobin

Disclaimer I was given products in this post for the purpose of review.  I was not paid to write this review.

A few years ago my older cousin committed suicide.  My family was crushed and left with that question of 'what could we have done.'  Most of the answers in someway involved his mom and dad.  You see they were abusive, drug addicts and just plain mean.  And not only were they all these things, but they singled my cousin out to take the brunt end of it.  We blamed them.  I spent a year actively hating both of them.  I lost sleep thinking about the things they done.  I missed family events if I knew one of them was going to be there.  I let hate rule my life.... and it was exhausting.  It wasn't natural.  One night as I lay awake I came to the conclusion it had to end.  I couldn't keep hating on them and live a Christian life.  So I started to pray.  I wont fib to you, those first few prayers were rough.  It was almost like I was tattle telling on them to God.  After a few nights I started to ask God to change their hearts, again though I wasn't praying the right prayer.  Finally, weeks later, I broke down and asked God to help me forgive them.  I asked him to change my heart, I tattle telled on myself and told him of the hate that was in my there.  I asked him  to heal the part of them that made them broken.  To pore his love onto them.  To give them the peace that only can be found in Jesus.  And at the end I asked God to forgive them for the things they done to my cousin.  It was one of those soul releasing prayers.  And the end of it even though I was crying and a mess I felt better.  A weight was lifted.  I prayed that same prayer night after night.  Eventually I realized the hate was gone and a true feeling of wanting them to be well was in my heart.

So I know everyone is going through something.  We all have hurts and pain.  We all feel shame and guilty.  God wants us to give those things to him, he wants us to seek him.  But how you may be asking?  How do I bring it to God?  How do I let it go when it feels so big? 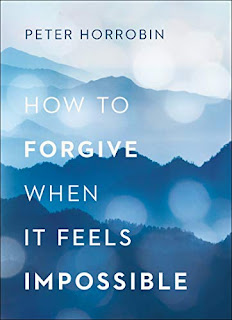 In Peter Horrobin's book How to Forgive When It Feels Impossible he talks about forgiveness.  'On the cross Jesus prayed these dramatic words: Father, forgive them, for they do not know what they are doing. He set a powerful example for us, demonstrating that forgiveness is possible even in the face of the worst that human beings can do to one another; and it frees us from hurtful and damaging human relationships. Forgiveness is the key to restoring our relationship with God, and it is the beginning of our lifetime adventure with Him. This liberating teaching from Ellel Ministries founder Peter Horrobin explores the most powerful prayer on earth--the prayer of forgiveness, even toward those who don't seem to deserve it. As we learn to set forgiveness as a foundation stone of our faith, we can rise above the bondage of bitterness. Here you will find words of healing for your past and the ability to walk through new doors of freedom in your future.

I think everyone should read this book.  I feel forgiveness is one of the hardest things for people to do.  We hold onto our unforgiveness like a shield, but this book reminds us that God never intended for us to do that.  It reminds us of how Jesus cried out for our forgiveness.  Forgiveness is his way, he modeled that for us.  There is so much good information in this book and so much scripture pointing us to Biblical truths about forgiveness.  Peter Horrobin gives us an 8 step process in forgiveness and I think number 4 is my favorite "Ask God to set you free" I say this because I don't think we truly understand just how strong the hold of unforgiveness is on us.  And I also like all the personal stories in this book, they make you connect with the message in a personal way.