I was given a review copy of this movie to offer my honest feedback.  I was not paid to write this review.

My youngest son and I love super hero movies.  I remember when my hubby and I first started dating (a very long time ago) he decided to take me to see a movie and let me pick the movie.  He was getting mentally prepared for one of the 2 romance movies playing.  He was pretty surprised when I picked the Spiderman movie... And yes I'm old, I do mean the Tobey Maquire one lol.  Fast forward and I now have a son who loves super heroes even more than I do!  My boys share a room and if you look in their closet you will see my oldest son's hoodies and behind those you see my youngest sons costumes.  Quinn has Flash, Batman, Deadpool, Spiderman, Superman and so many more!  And we are lucky enough to have a comic book store in our town.

Each time a new movie comes out Quinn and I make a pretty big deal about it.  There wasn't to much to get excited about this past year, but when Wonder Woman 1984 came out Quinn and I couldn't wait to see it.  We begged my hubby for HBOmax so we could watch it sooner, but the big meanie told us no!  But no worries it has finally arrived on DVD and all the waiting was so worth it. 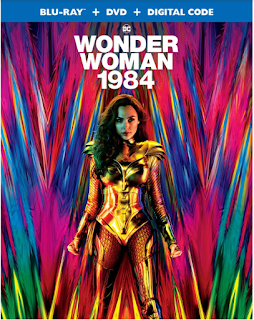 The fate of the world is once more on the line, and only Wonder Woman can save it. This new chapter in the Wonder Woman story finds Diana Prince (Gal Gadot) living quietly among mortals in the vibrant, sleek 1980s—an era of excess driven by the pursuit of having it all. Though she’s come into her full powers, she maintains a low profile, curating ancient artifacts and only performing her superheroic acts incognito. But now, Diana will have to step directly into the spotlight and muster all her wisdom, strength and courage in order to save mankind from a world of its own making. 4K AND BLU-RAY ELEMENTS “Wonder Woman 1984” 4K UHD Combo Pack and Blu-ray contain the following special features:

The Making of Wonder Woman 1984: Expanding the Wonder

It was action packed with an easy to follow enjoyable story.  Don't get me wrong there was one or two things I thought didn't add up, but overall the movies was fun and the action had me sitting on the edge of  my seat.  The characters were portrayed amazingly, two huge thumbs up to the cast!!  And I love that a woman hero is getting so much attention!   I love that Wonder Woman really is all about girl power.