I was given a copy of this game to provide my honest feedback.  I was not paid to write this post.

A long, long LONG time ago my brother and I were with my dad at the mall.  In the center of the mall was a guy selling some sort of cards.  Curious my brother and I walked over.  10 minutes later we both had $15 worth of Pokémon cards.  We went home and hurriedly compared which ones we had.  My brother had a check list to see which ones we still needed.  There was only a few compared to how many there are now.

Every time we went to that mall we got more cards.  But it didn't stop there suddenly there was a show, a movie, a game and McDonalds was even given out toys!  Every time we asked for more my dad would tell us it was a waste of money in a month no one is going to be playing with these things....

Oh how wrong he was because 20+ years later I'm still buying them.  No longer for myself, but now for my boys.  And some of the cards I got as a kiddo are worth money!!

Pokémon has been around for awhile now and collecting the cards is just as much fun now for kids as it was all those years ago.  But I think they best part of Pokémon is the games.  You become a trainer and become immersed into the Pokémon world!

The latest of the Pokémon games is Shield and Sword 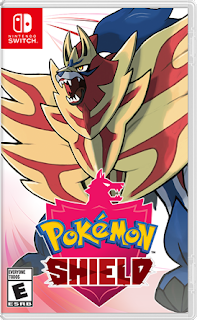 A new generation of Pokémon is coming to the Nintendo Switch system. Become a Pokémon Trainer, embark on a new journey in the new Galar region, and unravel the mystery behind the Legendary Pokémon Zacian and Zamazenta! Explore the Wild Area, a vast expanse of land where the player can freely control the camera. And participate in Max Raid Battles in which players will face off against gigantic and super-strong Pokémon known as Dynamax Pokémon.

Begin your adventure by choosing one of three new partner Pokémon: Grookey, Scorbunny, or Sobble and encounter new and familiar Pokémon as you catch, battle, and trade. Players can control the camera and explore the vast areas around them in the Wild Area. Team up with other players locally or online in the new multiplayer co-op Max Raid Battles. Trainers who possess the special item Dynamax Band can Dynamax their own Pokémon. Get ready for the next Pokémon adventure in the Pokémon Sword and Pokémon Shield games. 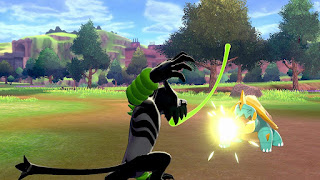 So we have the Shield game and it is my understanding that the difference between Shield and Sword is each game has its own exclusive Pokémon.  I watched my son play for a bit and I was so impressed with how far a long the game has come since I was younger!  The graphics are amazing and you control the camera.  I like that you can see the Pokémon running around.  When I was younger you walked in the grass and you only knew a Pokémon was there when the music changed.  In this game you can see them, you know exactly where to walk to try and catch them.  My son has been playing for a little over 15 days now and still has not beat it.  He told me there is so much to do (this was said with a smile, so its a good thing)  I like that they game isn't easily beaten.  To me that makes it worth the money.  I hate when I buy them (my kids) games and two days later they already beat them!  So.... a HUGE thumbs up to Pokémon Shield  for challenging them!

Even though they drive my son crazy, I personally think the "pokekids"(as he calls them) are hilarious.  He thinks he found some cool Pokémon only to find out its a trainer dressed up.  I can tell each time he comes across one because I hear him mumbling about stupid pokekid 😂.  I think it adds to the fun though.

If you like the Pokémon games this is a must have addition.