For our wedding anniversary my hubby and I go to a Penn State game.  Most of the time there is a home game right around our anniversary.  We get a hotel room for 2 nights and just enjoy the down time.  Here is the thing we aren't young people anymore.  After the game and the night before the game we just don't have much to do.  We get dinner, get ice cream at the creamery and even go to the mall.  Hey I'm going to a football game for my anniversary I deserve some mall time  lol.  But we are pretty much back at our room by 830.  So a few years ago we decided that each year we are going to find a new show and binge watch it on our laptop.  It was glorious not to have to push pause every 20 minutes to help the kids or take one of the pups out to use the potty. Our very first year doing this we put on Supernatural.  And became instantly hooked!  And even after 15 seasons the show still has me on the edge of my seat wondering what is going to happen next! 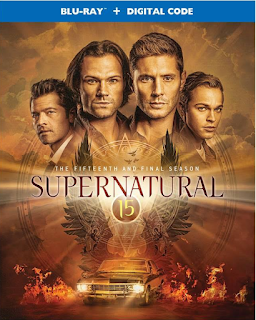 I'm not going to lie when I found out this was the last season I may have cried a little.  No  more Sam and Dean 😢.  No worries though my son is starting to like the show so I can just rewatch with him!

Bros. Home Entertainment marks the end of an era with the release of 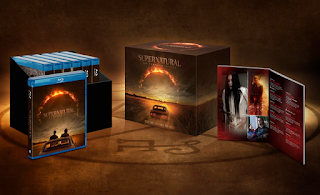 Supernatural: The Fifteenth and Final Season contains the final 20 epic

episodes from the landmark series’ final season, as well as a bonus disc loaded

with over two hours of special features including the special retrospective

episode Supernatural: The Long Road Home. Also on the bonus disc, and

exclusive to Blu-ray and DVD, are two all new featurettes, deleted scenes and a

Supernatural: The Complete Series contains all 327 thrilling episodes from the

phenomenal series, as well as countless hours of bonus features from all 15

epic, not-to-be-missed seasons. Fans who purchase the Complete Series will

series, set designs and letters to the Supernatural Family from both Eric Kripke

and Robert Singer. The Complete Series is priced to own on DVD for $329.99

representing a substantial savings over purchasing all fifteen seasons

Ackles) face everything from demons to vampires, ghosts, angels and pagan

gods. And with the help of the fallen angel Castiel (Misha Collins), they discover

that every threat they vanquish opens a new door for evil to enter.

Supernatural has spawned several novels, magazines, comics, games and even

and Alexander Calvert (Arrow, The Edge of Seventeen) as Lucifer’s son, Jack.

the long-running series was created by Eric Kripke (Revolution, Timeless), and

With Blu-ray’s unsurpassed picture and sound, Supernatural: The Complete

Series and Supernatural: The Fifteenth and Final Season will be released in

Supernatural: The End of the Road (New)

Supernatural is also available to own on Digital. Digital allows consumers to

their favorite devices.  Digital movies and TV shows are available from various

discs for redemption and cloud storage (US Copy Only).

and next-generation distribution scenarios. An industry leader since its inception, WBHE