I was given products in this post in order to provide my honest feedback. I was not paid to write this review.

Many, many MANY years ago a much younger me rented Space Jam with her even younger brother.  I remember thinking no way would I like it... It was about basketball.  Oh how wrong I was!  I fell in love with that movie and begged my parents to buy it for us so we could watch it over and over again.  It is now over 20 years later and I still have that same VHS tape.  My kids may just love the movie more than I do, because we watched it so many times it doesn't work so great anymore!

No need to worry though because yesterday Space Jam was rereleased in 4K Ultra HD.  It was like seeing one of my favorite movies in an all new way!  My VHS must have been a little worse off than I though, I couldn't believe how sharp the images are! 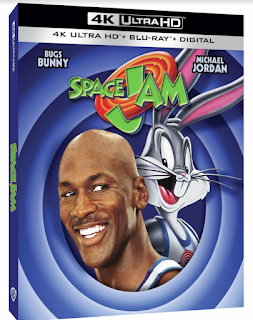 To celebrate the 25th anniversary of the beloved classic, Warner Bros. Home Entertainment announced today that the perennial family film Space Jam will be released on Ultra HD Blu-ray Combo Pack and Digital on July 6th.

. Fans can also own Space Jam in 4K Ultra HD via purchase from select digital retailers beginning on July 6th.

The world's greatest legends collide in a future universe with Jordan as a live-action hero entering a spectacular animated world. Captured by Bugs Bunny to foil a ghastly gang of space creatures, Jordan must play the basketball game of his life to save the beloved cartoon heroes from a hideous kidnapping scheme.

On July 6th, Space Jam 4K UHD will be available to own for streaming and download to watch anywhere in high definition and standard definition on favorite devices from select digital retailers including GooglePlay, Vudu, Xbox and others, and will be made available digitally on Video On Demand services from cable and satellite providers, and on select gaming consoles.