Are You Afraid of the Dark? Curse of The Shadows Holiday Guide Feature

I was given products in this post for the purpose of review.  I was not paid to write this review.  All opinions are my own.

My oldest son LOVES scary movies, for him the scarier the better.  My youngest son likes his "scary" to be a little less scary.  I on the other hand think I like scary movies...  You know until that night when I can't sleep because something evil is lurking under my bed.  My hubby hates when I watch something scary because I toss and turn all night and keep turning the light on.  I read somewhere once if you ever feel alone, just watch a scary movie, you wont feel alone anymore 😂

It is tough for us to find something for the whole family though.  Over the years we have found a few that were creepy enough for my oldest son, but not so bad that my youngest son and I couldn't sleep that night.  Scary Stories to tell in the Dark was a good one, the Goosebumps movies and just recently we discovered a tv that we all love

Are You Afraid of the Dark?

Name look familiar?  Well it was a show in the 90's!  Thankfully it was rebooted and season 2 was just released!!! 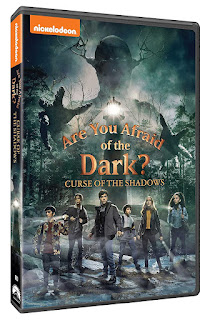 A NEW MIDNIGHT SOCIETY MADE ITS DEBUT IN ARE YOU AFRAID OF THE DARK?: CURSE OF THE SHADOWS, BASED ON THE CHILLING & BELOVED ‘90S ANTHOLOGY

The Midnight Society returns in a follow-up to 2019’s reimagined limited series horror anthology in Nickelodeon’s Are You Afraid of the Dark?: Curse of the Shadows, on DVD August 10, 2021. Based on the ‘90s kids’ cult classic and featuring a terrifying new story, the second season includes six hour-long episodes that follow an all-new group of kids as they tell the tale of a curse that has been cast over their small seaside town, haunted by a villain named the Shadowman. After their leader goes missing, it’s up to the remaining members of the Midnight Society to break the curse and free the Shadowman’s victims, before they too disappear into the shadows.

Are You Afraid of the Dark? Curse of the Shadows Episodes:

The Tale of the Haunted Woods

The Tale of the Night Frights

The Tale of the Phantom Light

The Tale of the Danse Macabre

The Tale of the Midnight Magic

The Tale of the Darkhouse

Are You Afraid of the Dark?

When I was younger I LOVED Are You Afraid of the Dark? There was one episode in particular about a doll house to this day I still get a little freaked out about.  Fan's of the 90's show pay close attention, there is a few moments thrown into the new series in reference to the old :)  I like that the series is scary enough that my oldest son enjoys, but not so scary that my youngest cannot enjoy them.  There is a really good story line that is easy to follow, but also keeps you on the edge of your seat.  I like that the writers really draw you into this world!  I love that the characters are relatable!  It makes it easy for viewers to connect with them.

And what is a scary movie without its villain.  Shadowman is super creepy.  You just catch a glimpse of him here and there leading to the chilling mystery of what is he.  When we finally get a peek at him it was so worth the wait!  He is pretty scary looking and def. a thing  of nightmares!  I feel his lore and mystery made Curse of the Shadows an instant classic.

Are you Afraid of the Dark? Curse of the Shadows is a must see.  And to make the fun last even longer check out the fun activity below: 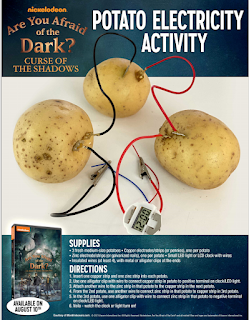