Empire of the Vampire

I was given products in this post for the purpose of review,  I was not paid to write this review.

There is one problem with a good book...  I lose way to much sleep once I start.  I play the "one more chapter" game.

The latest book I played this game with is Empire of a Vampire. 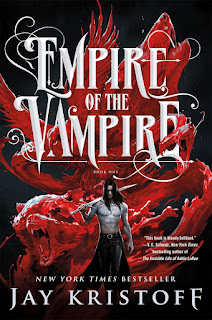 It has been twenty-seven long years since the last sunrise. For nearly three decades, vampires have waged war against humanity; building their eternal empire even as they tear down our own. Now, only a few tiny sparks of light endure in a sea of darkness.

Gabriel de León is a silversaint: a member of a holy brotherhood dedicated to defending realm and church from the creatures of the night. But even the Silver Order could not stem the tide once daylight failed us, and now, only Gabriel remains.

Imprisoned by the very monsters he vowed to destroy, the last silversaint is forced to tell his story. A story of legendary battles and forbidden love, of faith lost and friendships won, of the Wars of the Blood and the Forever King and the quest for humanity’s last remaining hope:

Okay so I know some of you are thinking... OH no not another vampire book.  Trust me when I tell you Empire of the Vampire is like nothing you've read before!  It has epic battles, the characters draw you into their story and actually have real problems that keep you on the edge of your seat, the villains are twisted and of course the good verse evil with a slim chance of hope thrown into the mix.   And the illustrations are beautiful.  The character and world building that Jay Kristoff does is amazing.  I feel like I'm there!  If you pick up any book in 2021 make it Empire Of the Vampire!