I was given products in this post for the purpose of review.  I was not paid to write this review.

I live in a really small town.  Normally I have to travel almost an hour to get anywhere.  As I said in a previous post the closest Walmart is 40 minutes away!  A few years ago a new shop was in the process of opening in our town.  Like most small towns it was a pretty big deal.  I wasn't to excited at first because I thought it was just going to be another pizza shop.  Yes for a small town we have at least 4 pizza shops!  I'm sure you can imagine my surprise and JOY when I found out it was going to be a comic box store!  I mean we are a small town, nothing this exciting ever comes to our town.  My boys are I LOVE graphic novels and comic books. Every year for Christmas there is at least one comic book for my boys under the tree.  And I try to make sure it is something new.  Finding a new series is always fun!

One of the newer series we discovered is Whistle: A New Gotham City Hero 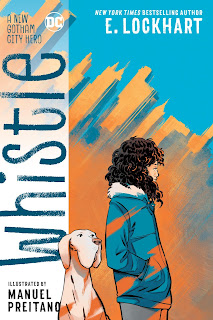 Sixteen-year-old Willow Zimmerman has something to say. When she’s not on the streets advocating for her community, she’s volunteering at the local pet shelter. She seeks to help all those in need, even the stray dog she’s named Lebowitz that follows her around. But as much as she does for the world around her, she struggles closer to home—taking care of her mother, recently diagnosed with cancer. Her job as an adjunct professor of Jewish studies does not provide adequate health insurance—and Willow can see that time is running out.

When in desperation she reconnects with her estranged “uncle” Edward, he opens the door to an easier life. Through simple jobs, such as hosting his private poker nights with Gotham City’s elites, she is able to keep her family afloat—and afford critical medical treatments for her mother.

Willow’s family life quickly improves through the income provided by these jobs, but it comes at the cost of distancing herself from the people she truly cares about. Her time is now spent on new connections, such as biologist and teacher Pammie Isley. And when Willow and Lebowitz collide with the monstrous Killer Croc outside the local synagogue, they are both injured, only to wake up being able to understand each other. And there are other developments, too...strange ways in which they’ve become stronger together. Willow’s activism kicks into high gear—with these powers, she can really save the world!

But when Willow discovers that Edward and his friends are actually some of Gotham’s most corrupt criminals, she must make a choice: remain loyal to the man who kept her family together, or use her new powers to be a voice for her community.

And it was released today Sept. 7th!  So you don't need to wait to order your copy.

I love the plot twists in the story.  I was only planning on reading a few pages, but after the first few I was hooked and had to finish to see what happens.  The illustrations are really detailed and add so much depth to an already thrilling story.