I was given products in this post for the purpose of review, I was not paid to write this review.

My mom re-watches the same TV shows over and over.  She doesn't really like "current" tv shows.  She loves all the old ones.  A few years ago I introduced her to Downton Abbey and she fell in love.  We even went to see the movie in theaters.  My mom NEVER goes to see movies in theaters.  Downton Abbey just had that old tv  show feel to it.    Recently I found the TV show Land Girls and I just knew it was the kind of show she was going to love.  The complete collection releases on October 19, 2021 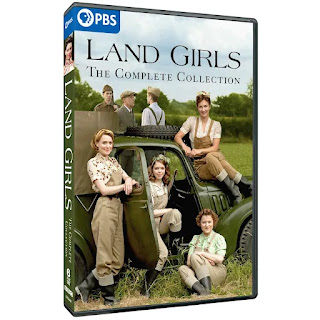 Follow the lives, loves, highs, and lows of members of the Women's Land Army working at the Hoxley Estate during World War II. As men fought on the battlefields, women from all walks of life worked the farms that fed the nation, doing their part to keep the home front running.

Season One - Meet four girls away from home, doing their bit for Britain in the Women's Land Army of WWII. Joyce, Nancy, Annie and Bea join the Land Army officially to help Britain dig for victory, but they each have their own reasons.

Season Two - Will new girl Connie – young, brash and sexy, with the voice of an angel – cause trouble on the farm? Lady Ellen Hoxley is overrun with Americans when the manor is temporarily commandeered for military planning, and it is one American in particular, wealthy industrialist Jack Gillespie, who charms his way in permanently. Romance, strife and a German on the loose – rural bliss!

Season Three - Hoxley Manor is transformed into a military hospital, while Lady Hoxley is confronted by a blast from the past. A new arrival at Pasture Farm will change things for the girls, while everyone has their own secrets to keep to themselves.

The show had a little bit of everything:  drama, suspense and even adventure.  It is a slow moving show though and not for someone who likes fast pace.  And really, I think people like my mom whom enjoy "era" type shows and movies will like it best.  It was neat to see how the women settled into something unknown and suddenly had to do "mans" work.  It was also fun to see how they handled there new found freedom.  I do not think this show will be enjoyable by everyone.  I really do think you need to have a love for "old fashion" type shows.