Smallville: The Complete Series for the first time ever is on Blu-ray #sponsored

I remember my first 3 TV crushes.  The first two were Spike and Angel from Buffy (don't judge me I was a teenager lol) and the 3rd was Clark Kent from Smallville.  I use to love staying up past bedtime to watch Smallville with my mom and later in life with my little sister.  Now years later  (20 years to be exact) Smallville is back and for the first time ever on Blu-Ray.  The best part about watching these old shows again is I get to share them with my kids and also view them as an adult.  Like I said when I was younger I was mostly focusing on Clark.  As an adult I'm amazed at just how good the show is.  The story line has just the right amount of drama and we get to see another side of Superman.  Don't worry there is also plenty of action too. 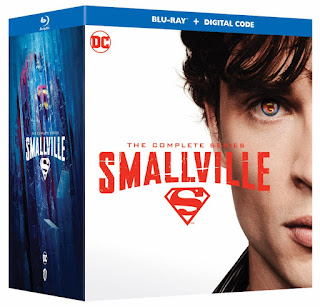 It’s been 20 years since Clark Kent first arrived in Kansas, and in honor of the 20th Anniversary of the remarkable series, Smallville: The Complete Series 20th Anniversary Edition will soar onto Blu-ray for the first time ever from Warner Bros. Home Entertainment on October 19, 2021. This set for the ultimate fan features all 218 episodes along with over 28 hours of bonus features from all 10 incredible seasons, plus Digital Copy (US Only).

The groundbreaking, Emmy®-winning 10-season hit that redefined the origins of the world’s greatest super hero is all here – from Krypton refugee Kal-El’s arrival on Earth through his tumultuous teen years to Clark Kent’s final steps toward embracing his destiny as the Man of Steel. Relive a decade’s worth of thrills in fantastic adventures full of action, heart and humor in abundance, all anchored by the marvelous performance of Tom Welling at its center. Savor again the series’ thoughtful and imaginative integration and reinvention of the iconic characters of DC lore. And let your spirits be lifted up, up and away.

MORE THAN 28 HOURS OF BONUS FEATURES

The Adventures of Superboy – The original 1961 pilot starring John Rockwell.

A Retrospective Look at the Series’ 10-Year Journey – An in-depth, season-by-season look at the creation of this landmark television series. Highlights include interviews with Tom Welling, Eric Durance, Michael Rosenbaum, Phil Morris, John Schneider and many more, as well as rare behind-the-scenes footage.

A Decade of Comic-Con Featurette

Smallville’s 100th Episode: Making of a Milestone – An extended version of the original featurette included in the Season 5 set. Secret Origin: The American Story of DC Comics – A feature length documentary chronicling DC’s 75 years of challenges, creativity, and triumph.

Audio Commentaries, Deleted and Extended Scenes, Gag Reels, Behind-the-scenes featurettes and much more from all 10 seasons!

DIGITAL Smallville: The Complete Series is currently available to own on Digital. Digital purchase allows consumers to instantly stream and download to watch anywhere and anytime on their favorite devices. Digital movies and TV shows are available from various digital retailers including Prime Video, Apple TV, Google Play, Vudu and others.

And here is something extra for us Smallville super fans!