I was given a digital copy of the product mentioned in this review.  I was not paid to write this review

At some point in time we have all seen a Clint Eastwood movie.  Hollywood is made of legends and Clint just happens to be at the top of that list.  My aunt is in LOVE with Clint Eastwood, so I was lucky enough to grow up watching ALL his movies.

So what makes this man so amazing you may be wondering?

Prior to that, he directed and produced the searing real-life drama “American Sniper,” starring Bradley Cooper. The highest-grossing film of 2014, “American Sniper” was also one of the most acclaimed, receiving six Oscar nominations, including Best Picture. The film also brought Eastwood his fourth Directors Guild of America (DGA) Award nomination and a National Board of Review Award for Best Director.

A four-time Oscar winner, Eastwood won his first Oscars, for Best Director and Best Picture, for his 1992 Western “Unforgiven,” which received a total of nine nominations, including one for Eastwood for Best Actor. Eastwood also won Golden Globe and DGA Awards for the film, which garnered Best Picture honors from several critics’ groups.

In 2005, Eastwood won two more Oscars in the same categories for “Million Dollar Baby,” again earning a Best Actor nomination for his performance in the film. He also won his second DGA Award and another Best Director Golden Globe, as well as a Golden Globe nomination for the film’s score.

Eastwood has twice more earned dual Oscar nominations, in the categories of Best Director and Best Picture, for the dramatic thriller “Mystic River,” for which he also garnered Golden Globe and DGA Award nominations, and the World War II drama “Letters from Iwo Jima,” which won Golden Globe and Critics’ Choice Awards for Best Foreign Language Film and received Best Picture Awards from a number of film critics groups. “Letters from Iwo Jima” was the companion film to Eastwood’s widely praised drama “Flags of Our Fathers.”

In 2008, Eastwood’s “Changeling” received three Oscar nominations and Eastwood received BAFTA Award and London Film Critics Award nominations for Best Director, as well as a Golden Globe nomination for Best Original Score. The film was also nominated for a Palme d’Or and won a Special Award when it premiered at the 2008 Cannes Film Festival. He had received three previous Palme d’Or nominations: for “White Hunter Black Heart,” in 1990; “Bird,” at the 1988 festival; and “Pale Rider,” in 1985. He also won his first Best Director Golden Globe Award for “Bird.”

Eastwood first came to worldwide fame as an actor in such legendary Westerns as “A Fistful of Dollars,” “For a Few Dollars More,” “The Good, the Bad and the Ugly,” “Hang ‘Em High,” and “Two Mules for Sister Sara.” His film acting work also includes “Kelly’s Heroes,” “Escape from Alcatraz,” the “Dirty Harry” actioners, “Every Which Way But Loose,” “Any Which Way You Can,” “In the Line of Fire” and “Trouble with the Curve.”

Over the course of his remarkable career, Eastwood has received a number of lifetime and career achievement honors, including the Motion Picture Academy’s Irving Thalberg Memorial Award and the Hollywood Foreign Press Association’s Cecil B. DeMille Award. He has also garnered tributes from the Directors Guild of America, the Producers Guild of America, the Screen Actors Guild, the American Film Institute, the Film Society of Lincoln Center, the French Film Society, the National Board of Review, and the Henry Mancini Institute. He is also the recipient of a Kennedy Center Honor, the California Governor’s Award for the Arts, and France’s Commandeur de la Legion d’honneur.

Are you convinced now that the man is a legend?  His career is beyond remarkable and I could never do it justice in this post.  Thankfully someone has put together a 9 episode documentary! 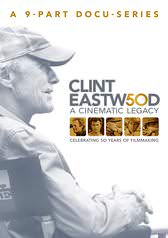 There is just so much information and if I didn't love him before watching this documentary I do now.  It gives an amazing inside look to his career.  It was also fun to see what his fellow actors had to say about him.  They are in just as much awe as we are.  If you are a fan or know a fan this documentary is a must see viewing experience.