I was given product in this post for the purpose of review.  I wasn't paid to write this review.  All opinions are my own

My hubby isn't hard to entertain.  He likes food, football and funny tv shows.  He is so that person that sits on his phone laughing at memes.  I don't judge, if anything I think it is endearing.  With that being said we do not agree on many TV shows.  Every once in awhile something like Supernatural or Friends comes along and we both like the show for different reasons.

In the past few years my hubby has been watching a tv show called Rick and Morty.  And even though I'm not a fan, he loves the show.  Every time he watches an episode he laughs and tries to rewind our DVR so he can show me a "funny part."  When I told my hubby that I got him The Complete season 1-4 he was so excited!   Even better I told him it came with a digital code so now he can watch on his phone anywhere.

For those of you who never saw Rick and Morty it is def. an off the wall kind of humor show.  It isn't for everyone, but my hubby and brother LOVE it.  So if you like "twisted"  humor it is for you! 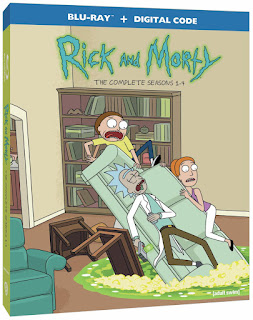 Wubba-lubba-dub-dub! From creators Justin Roiland (“Adventure Time”) and Dan Harmon (“Community”), go on an intergalactic journey across the multi-verse with the release of Rick and Morty: Seasons 1-4 boxed set, now available on DVD & Blu-ray from Warner Bros. Home Entertainment. Binge on one of cables #1 watched comedies - and follow the misadventures of America’s favorite crazy scientist and his grandchildren with this outrageous boxed set which includes all 41 episodes from the first four seasons of the award-winning series, along with copious special features, including audio commentary, deleted scenes, “Inside the Episode” segments, numerous featurettes, past animatic sketches, and more.

Oh and you even get a poster!  My hubby was way to excited to hang it in his "man cave."

For anyone with a Rick and Morty fan in their life this is def. an epic Christmas gift!