I was given products in this post for the purpose of review.  I was not paid to write this review.

I don't want to brag, but..... I am so much cooler than my hubby.  Okay I know you need some evidence.  When we first started dating we had a "lazy Sunday" date.  Each of us had a different idea as to what we were going to do.  We both agreed def. pizza and snacks, but that was were the agreements stopped.  He wanted to sit in my parents living room watching Sunday Football.  I wanted to have an all day marathon of Lord of the Rings.  After a great debate we ended up splitting the day up.  1 game and than a movie.  I want to say I made my hubby a true fan, but he just wasn't cool enough to really enjoy the movies.  Now 16 years later and many views later he still doesn't like the movie as much as I do.  No matter though both my kids are fan and that is good enough for me.   We were super excited when we saw there was a Middle Earth Ultimate Collectors Edition being released on 4k Ultra HD 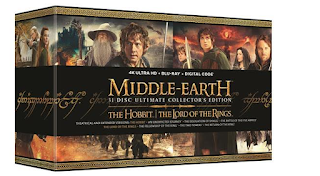 The 4K remastering process was overseen by Peter Jackson.

The packaging alone make this set a must have for collectors.  So I know you are trying to figure out why there is so  many discs?   Well each movie comes with a 4k Ultra theatrical and extended edition.  For those unable to enjoy the movie in 4k Ultra there is also a Blu-ray copy of the theatrical and extended edition.  My favorite disc was the special features discs.  These included several cast reunions, I enjoyed seeing my favorite characters reunited!  Also this amazing set includes the booklet mentioned above giving details about the species of middle earth and also fun costume sketches.  As if that wasn't enough there is a deck of poster cards that feature the places of Middle Earth and offer details on each.  This deck features beautiful photos.

If that still wasn't enough you also get a digital copy of each movie!  So you can watch anywhere you go.

As a fan I'm  excited to own this set and even more excited, because I think the 4k Ultra HD quality may finally make my hubby a fan??!?!?!  Most likely not, I fear he is a lost cause.  But at least my boys and I can enjoy one of our favorite series in a whole new way