The Many Saints of Newark #ad

In June of 2007 The Sopranos aired new episodes for the very last time.  No more Tony on a Sunday night.  Like many others there was suddenly this Sopranos shaped hole in my life.  I got lucky, several years later I was talking about the show with my hubby and discovered he never saw it!!  Which meant we of course had to go buy the whole series and watch them.  The downside.... that too eventually came to an end.

But after many Sopranosless years I'm excited to announce that there is a prequel!  Yes you read that correctly.

The Many Saints of Newark 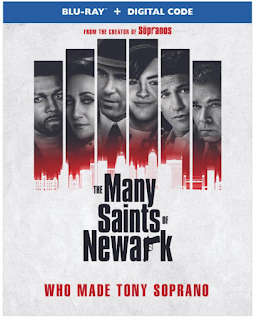 Discover who made Tony Soprano when “The Many Saints of Newark” arrives for Premium Digital Ownership at home on November 19. The film is directed by Alan Taylor (TV’s “Game of Thrones,” TV’s “Madmen”) from a screenplay by series creator David Chase and Lawrence Konner, based on characters created by Chase, and stars Alessandro Nivola (“Disobedience,” “American Hustle”), Tony winner Leslie Odom Jr. (Broadway’s “Hamilton,” “Murder on the Orient Express”), Jon Bernthal (“Baby Driver,” “The Wolf of Wall Street”), Corey Stoll (“First Man,” “Ant-Man”), Michael Gandolfini (TV’s “The Deuce”), Billy Magnussen (“Game Night,” “The Big Short”), Michela De Rossi (“Boys Cry,” TV’s “The Rats”) and John Magaro (“The Finest Hours,” “Not Fade Away”). The film will also be available on 4K, Blu-ray and DVD beginning on December 21.

On November 19, “The Many Saints of Newark” will be available for early Premium Digital Ownership at home for $24.99 and for 48-hour rental via PVOD for $19.99 SRP on participating digital platforms where you purchase movies.

“The Many Saints of Newark” will also be available on Movies Anywhere. Using the free Movies Anywhere app and website, consumers can access all their eligible movies by connecting their Movies Anywhere account with their participating digital retailer accounts.

Young Anthony Soprano (Michael Gandolfini) is growing up in one of the most tumultuous eras in Newark’s history, becoming a man just as rival gangsters begin to rise up and challenge the all-powerful DiMeo crime family’s hold over the increasingly race-torn city. Caught up in the changing times is the uncle he idolizes, Dickie Moltisanti (Alessandro Nivola), who struggles to manage both his professional and personal responsibilities—and whose influence over his nephew will help make the impressionable teenager into the all-powerful mob boss we’ll later come to know, Tony Soprano.

“The Many Saints of Newark” 4K UHD combo pack and Blu-ray contain the following special features:

“The Many Saints of Newark” DVD contains the following special feature:

I loved it.  I'm not sure if you picked up who is playing young Tony, but that is James Gandolfini son!  I thought that was epic that the original actor's son played him in the prequel.  Like most prequels I was nervous.  I always expect not to like them, but that was not the case with The Many Saints of Newark.  This movie added an entire new element to The Sopranos and has me wanting to rewatch the series for a 3rd time.  I def. think any fans need to watch this movie.