Warner Bros. Home Entertainment provided me with a free copy of the DVD I reviewed in this Blog Post.  The opinions I share are my own

I know I told this story several times on my blog, but it is one worth repeating.  Several years ago, at a family cookout my mom jumped up and said she has to go "someone" (I cannot remember the name) is having a baby in the bathtub.  I jumped up and bewildered asked who!!  She repeats the name I cannot remember and looks at me like I lost my mind for holding her up.  At this point I'm wondering if one of her and my dad's rescue dogs came in pregnant.  Or if there really is a human giving birth in my mom's tub, with my mom you never know.  Heart racing, I grabbed my stuff ready to go assist with this bathtub delivery.  My mom then informs me it is one of her favorite episodes of The Waltons!  She is lucky I wasn't near the potato salad I most likely would have tossed it at her lol

That is my mom though, she loves her old tv shows and rewatches them over and over.  She talks about the characters likes they are her BFFs.  Sometimes when I hang out with her to watch her shows she literally mouths all the words.  She has the shows memorized.

And let's face it they are old shows so there aren't any new ones come out.  Or so we thought! 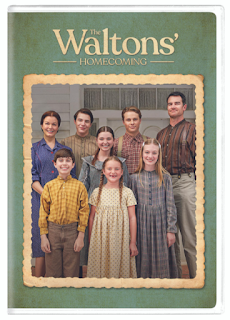 Available on Digital Dec. 6 & DVD Dec 14 This holiday season, celebrate one of television’s most beloved family dramas with Warner Bros. Home Entertainment’s release of The Waltons’ Homecoming, available on Digital December 6 and DVD December 14, 2021. The feature-length film commemorating the original holiday film that launched the long-running series The Waltons stars Logan Shroyer (This Is Us) as John Boy Walton, Bellamy Young (Scandal, Prodigal Son) as Olivia Walton, Ben Lawson (Firefly Lane) as John Walton Sr., and Richard Thomas (The Americans, The Waltons) reprises his role as the adult John Boy and narrator. The Waltons’ Homecoming is set in the 1933 Depression Era and is told through the eyes of John Boy, the 17-year-old eldest child of John and Olivia Walton. His mother expects John Boy to help her raise his sisters and brothers, and his father expects him to follow in his footsteps to help support the family but secretly, John Boy wants to be a writer.