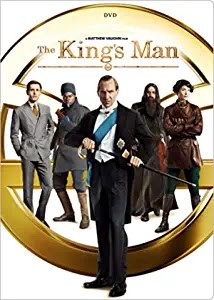 Uncover the secrets of the world's most stylish spy organization and learn how it all began with the ingenious and action - packed origin story The King’s Man . From masterful filmmaker Matthew Vaughn, The King’s Man explores the mythology of the very first independent intelligence agency. Set in the historic WWI era, the lethal yet impeccably trained spies take on the ultimate mission to save the fate of humanity .

Add the film to your Kingsman collection on Digital February 18 and on 4K UHD , Blu - ray and DVD February 22.

Also for fans of the stylish spy series comes The Kingsman Collection. All three films, with bonus features, together for the first time. The collection will be available digitally on February 18 and as a collectible Steel Book on February 22

The King's Man: The Great Game Begins Documentary o A Generation Lost – Discover how the filmmakers created a richly textured story that explores the origins of the Kingsman spy organization.

All the World's a Stage – Delve into the meticulous world - building of THE KING’S MAN with interviews, on - location footage, artwork, and details of on - set construction and design.

Instruments of War – Experience t he analog spy tech and early 20th century weaponry utilized in THE KING’S MAN and see a breakdown of the precise execution and evolution of the major stunts and combat in the film.

Long Live the Kingsman – Cast and crew reveal their thoughts about their collective journey through the very special experience of making THE KING’S MAN.

No Man's Land – Experience the creative process behind the harrowing knife battle sequence in several stages: rehearsals, storyboards, interviews and on - set footage, culminating with the atmospheric VFX.

Remembrance and Finding Purpose – Learn about amazing organizations such as The Royal British Legion and Help for Heroes, two U.K. - based resources for recovery, well - being and employment for military veterans. Also hear why Matthew Vaughn strongly supports their mission.

I adored the other King's Man movie.  This one however has me feeling a bit disappointed.  I'm not going to say it was a bad movie.  The action scenes were amazing, and the cast was pretty epic.  The movie just felt like it jumped around too much.  And some of the Rasputin scenes were just a bit to over the top.

But as a fan of the series, I def. think it is a must watch.