Disclosure: Many thanks to Collide Distribution for providing a sample of the product for this re- view. Opinions are 100% my own. 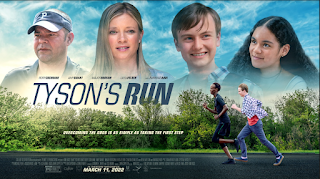 When fifteen-year-old Tyson attends public school for the first time, his life is changed forever. While helping his father clean up after the football team, Tyson befriends champion marathon runner Aklilu. Never letting his autism hold him back, Tyson becomes determined to run his first marathon in hopes of winning his father's approval. With the help of an unlikely friend and his parents, Tyson learns that with faith in yourself and the courage to take the first step, anything is possible.

Have you ever found yourself trying to get the approval of a parent? If not, you likely know someone who has. That’s where Tyson, a teen with autism, finds himself as he watches his hero father lead the high school football team. Tyson’s Run is not only relatable, but also a beautiful picture of the rewards of dreams, determination, and relationships when we don’t quit.

I have 3 siblings 1 sister and 2 brothers.  One of my brothers in adopted and didn't come live with us until he was well into his teen years.  His name is Matt and for those of you who don't know, Matt, is mentally disabled.  Doctors told my dad my brother would never live a normal life.  He said Matt would never drive a car, never be able to handle day-to-day tasks, never have deep relationships with others and never be able to work a real job.

My brother has a driver license and also works full time.  Not only can he drive, but he also has his own loan for the truck he drives. Not only does he work, but this past year he got the associate of the year award.  My brother does live with my dad, but he pays all of his own bills.  My brother even purchased a camper and goes camping with his friends in the summer.  I'm not going to lie; my brother is a likeable guy.  He even has more friends than me!!!

My brother not only lives a normal life, but he thrives!

He exceeded every limitation that was placed on him.

During the first 10 minutes of Tyson's Run I was crying.  Because it reminded me so much of my brother.  Tyson's Run is a heartfelt movie that reminds us our first action should always be love.  Tyson's dad struggles with having a son with autism.  I love that not only is this movie about Tyson meeting and exceeding challenges, but also about his dad's personal growth and his dad seeing Tyson for the wonderful gift he is.  This movie doesn't sugarcoat anything.  I've worked in a school with autistic children, and it broke my heart to see how the other kids shied away from them.  I know that at an older level like Tyson, that "shying away" turns into bulling.  I honestly wish this movie would be showed in every school to help kiddos understand others like Tyson.

Tyson's Run really is a much watch.  It will break your heart and inspire you at the same time.

Tyson’s Run is a movie we can all relate to. Tyson’s longing to be accepted by his father leads him to push himself further than anyone might have thought possible. Ultimately, it is a heart-warming story of overcoming odds, changing perceptions, and of love winning. Don’t miss it on March 11th! And to help celebrate this movie you have the chance to win a $20 amazon gift card!
CLICK HERE to enter