I was given products in this post for the purpose of review, I was not paid to write this review.
Several days ago I told you my favorite part of the Christmas guide is the pet section.  I wasn't kidding and this year the gifts for pets are so epic that I had to make another page for them!
Part one can be found here
Merry Woofmas part 1
So a little more back story about my best friend Loki.  I got to meet Loki for the first time when his little eyes were just opening.  He was around 2 weeks old and melted my heart from the start.  I went to  see him every single week.  I even purchased his name tag before he officially came home with me.  And here is a little secret about me... I dread the puppy stage. I LOVE LOVE LOVE dogs, but I wish they could just skip that puppy stage lol.  Loki changed that for me.  He made me realize that part of be coming the amazing dog he is, all started with the naughty little puppy he was. 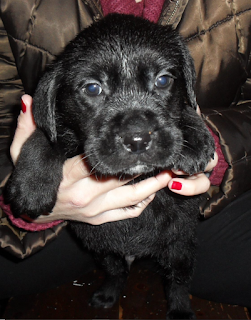 This is one of the first photos of him, before I got to bring him home! Just look at those sweet little soulful eyes.
Okay so before I get off on a 3 page report on how awesome my dog is let me tell you one of Loki's sweetest quirks.
When you come to my house Loki is the first person to greet you.  He really quick runs up gives you a kiss, wags his tale so hard it shakes his whole  body and then takes off.  I know you are wondering where did he go?  To the toy bin!  You see Loki must present each of our guest with a toy when they come over.  First he must see who you are so he can pick a toy accordingly.  Most adult men get a tug of war toy.  Females normally get a littler toy that they can ooo and aww over.  But little kids they hold a special place in Loki's heart.  His favorite toy stays in my bedroom most of the day.  I think he is hiding it from people.  When little kids come over though he runs back to my room to grab that very special toy and show it to them.  And he even lets them play with it!  Loki has had this toy for years and at this point I have sewn it so many times I think 40% of its make up is patches and thread.  It is his favorite though and when he presents it to you it is his way of saying 'hey your kind of special'!  He loves to play and his toys are just one of the ways he shows his heart to others.
So our toy boys has grown over the years.  I mean cause really who could say no to this face

With that said it is obvious Loki gets quite a few toys for Christmas.  Like sometimes my kids roll their eyes because it takes him almost as long as them to open everything.
Wait until you see the awesome toys being offered this year by godgo. 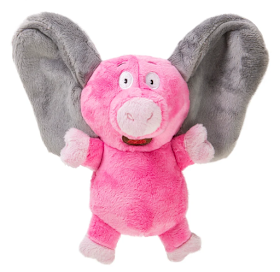 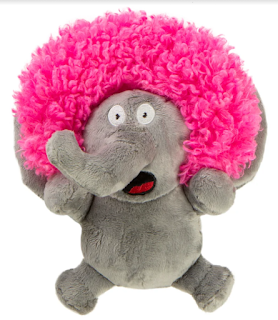 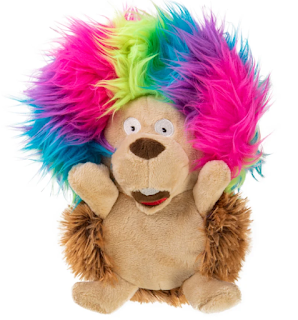 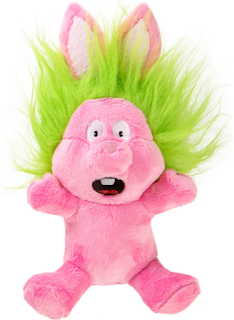 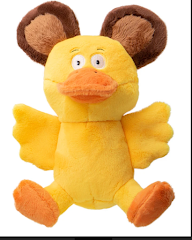 goDog Silent Squeak Toys with Chew Guard Technology has all the fun of a traditional squeaker toy without the squeak. Silent Squeak Toys are tuned to an ultrasonic frequency between 24 and 28 KHz that is silent to people, but NOT to dogs. Made with Chew Guard Technology giving this toy a super tough chew-resistant lining and reinforced seams to withstand rough play. Although NO toy is indestructible, but the Chew Guard Guarantee promises consumers a one-time toy replacement, if it does not outlast a standard plush. Styles include:
Crazy Hairs: Elephant, Hedgehog, Lion, & Rabbit
Flips: Pig Elephant, Gator Monkey, Duck Bear, Monkey Rabbit
Aren't they so cute!  Loki thinks so and fun!  He can go crazy with that squeaker and I don't hear a thing as I try to get some work down around the house.  Or you know try to sleep, because my crazy dog gets out of bed at 3am to get a toy to bring back into bed.  I don't know if he thinks the toy was lonely or what makes him go grab it at that time, but I have woken up several times with a dog toy  laying next to my face :)!!!
Up next we have some items to get my stinky pup clean.  I'm not sure if anyone remembers, but I have 8 chickens.  5 I raised from baby chicks, and those 5 are Loki's babies.  He loves the other 3 too, but those three are not so fond of him.  So the 5 not so little chickens still like to hop on top of Loki like when they were babies.  And he loves this.  And like the gentle giant he is, he even walks different so no one falls off.  Here is the thing about chickens though... They poop whenever the mood strikes.  My poor Loki who just wants to be loved has gotten pooped on a time or two.  Not that it phases him mind you, but after we are done outside I take him inside for a nice bath... Which he hates.  And here is the crazy thing, when I'm in the shower I have to close the door or he tries to hop in with me.  But if he knows it is time for him to get clean suddenly he hates the shower!  My dog is quirky!
I want to use products that wont mess with his skin, but will make him clean and have his fur shine.
EQyss Premier Shampoo is the finest pet shampoo available! You will notice a difference the first time you use it. Makes your pets the softest, most touchable pets around. Leaves the hair shaft completely clean, not coated with silicone, oil, or synthetic polymers. Premier uses a Scientifically Superior formula and natural botanical extracts to gently cleanse and intensify colors. Makes white coats brilliant, browns richer, and dark coats darker and shinier than ever before! No need for a blueing agent or coat whitener, which can dry out or do damage to your pet. For best results, use with Premier Pet Conditioner and Premier Pet Spray for maximum conditioning and moisturizing. Tropical scent. 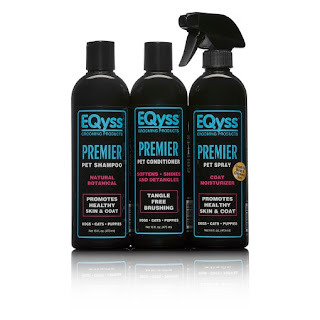 My Loki has the blackest of black fur.  In-between baths it can start to look a little dull. I love that EQyss shined him right up and made him not only look clean, but healthy too.  The scent was really  nice. I liked that it wasn't over powering.  I wont lie though I was really tempted to even use it in my own hair.  It has a really  nice crisp clean scent to it.
So my Loki is clean.  YAY!  Now you know Loki has those chickens as friends, but he also has another little friend that lives inside the house with us. 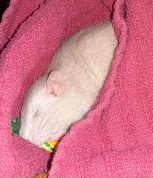 This is Cooper our pet rat.  He may be little, but his heart is so big.  His favorite things to do is curl up with Loki when he comes out of his pen.  Sometimes I feel like he doesn't even see me as his runs toward his big fuzzy buddy.  And Loki gives him little kisses and takes the smallest steps possible so he doesn't accidently step on his little buddy.  After several minutes of playing they both plop down for a nap.  Cooper between Loki's front paws and Loki with his head laid just right as to not hurt his little buddy.
Once a week during their play time I complete clean Coops pen.  He is litter trained so clean up is pretty easy.  I do like to use something to take away the smell in the litter pen though.  Rats have really sensitive respiratory systems so I need something that isn't harmful.
Natural Chemistry has a Healthy Habitat spray.  That contains naturally based enzymes. 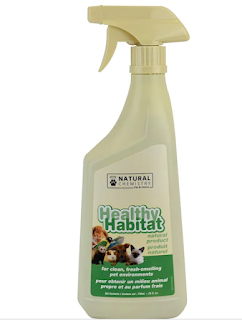 Natural Chemistry Healthy Habitat is specifically formulated to effectively eliminate odors and soiling caused by organic animal and food waste using only safe, natural enzymes and no harsh chemicals. Easy to use, safe and powerful All natural and hypo-allergenic enzyme technology eliminates odors Cage cleaner and deodorizer for reptiles and small pets Safe for use on all strong animal/reptile odor sources and stains. That means its great for reptiles, hamsters, guinea pigs, ferrets, birds, rabbits, and more. It can even be used when your pet is in its habitat! Its safe for use in any pet home, or on any glass or other surfaces within the habitat, including heat rocks, gravel, artificial plants, etc. The patented technology uses trillions of natural enzymes and co-enzymes to break down undesirable organic materials safely and effectively...resulting in a healthier pet environment. Natural Chemistrys products are inspired by processes that occur in the natural world.

Last but not least I got a product that isn't even for my Loki!  I know, don't tell him he wont forgive me.   I got it for my dad who has little chihuahua.  My Loki loves people and has no fear.  I raised him with all types of animals, big and small.  It is nothing for him to jump on farm equipment with  me to do work.  My dads pup though is a rescue (who was deeply abused) and even though she adores people the entire world scares her.  The few times my dad tried to leash walk her in public she ended up trying to crawl up his leg.  And like Loki and I, my dad adores his dog.  He wants to take her everywhere too.  Sadly it isn't possible for my dad to always be carrying her.  He needs his arms free.
Which is why I just knew the SHERPA Airline Approved Travel Backpack Pet Carrier is perfect for traveling in style and comfort by plane or car, for an adventure or just a trip to the vet. Patented spring wire frame allows the rear end of the carrier to be pushed down several inches. Mesh windows for ventilation, top and side entry with locking zippers for safety 100% satisfaction guarantee. 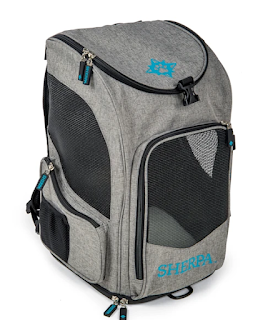 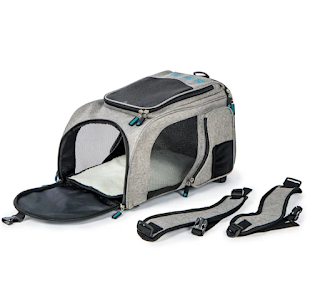 I love that my dad can now easily carry her.  And little Tink loves it.  My dad always puts a favorite toy or blanket in there with her and she just sits back and enjoys the adventure.  Being closer to my dad's voice and not having to walk on her own has made going up so much fun for little Tink.  And when people come over to pet her instead of shying away she eats up the attention!  For a little dog whom has known so much pain by the hands of people it amazes me she is brave enough to love again.
She feels comfortable and safe in her travel backpack!   And my dad can carry her backpack style of like a gym bag at his side.  I did have to have a talk with him though, when he started to tell me his plans to sneak her into the movie theater....  😆
Our pets give us so much.  This holiday season please considered the items above when shopping for them. It can be a toy to bring them joy, a shampoo line to get them clean or a carrier that gives them a sense of security 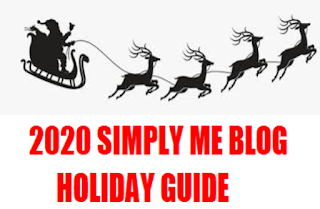